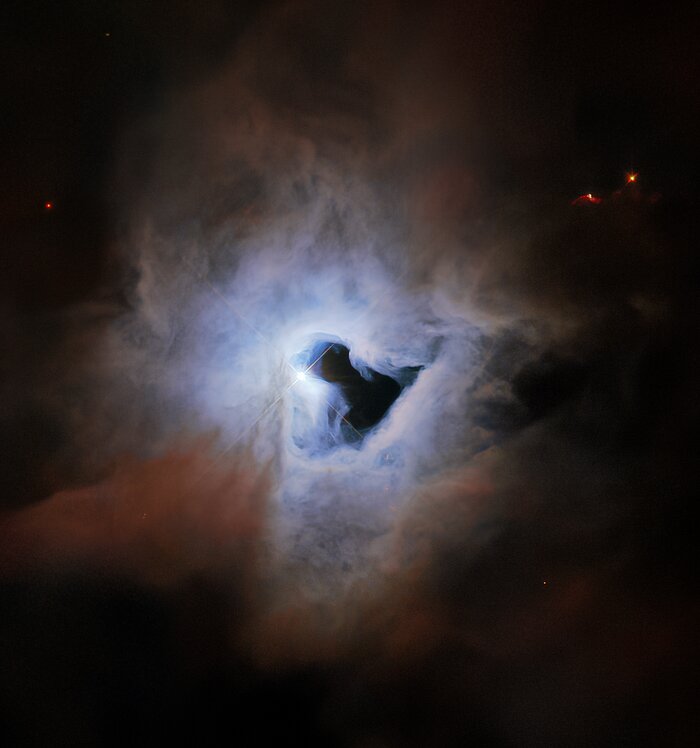 This peculiar portrait from the NASA/ESA Hubble Space Telescope showcases NGC 1999, a reflection nebula in the constellation Orion. NGC 1999 is around 1350 light-years from Earth and lies near to the Orion Nebula, the closest region of massive star formation to Earth. NGC 1999 itself is a relic of recent star formation — it is composed of detritus left over from the formation of a newborn star.

Just like fog curling around a street lamp, reflection nebulae like NGC 1999 only shine because of the light from an embedded source. In the case of NGC 1999, this source is the aforementioned newborn star V380 Orionis which is visible at the centre of this image. The most notable aspect of NGC 1999’s appearance, however, is the conspicuous hole in its centre, which resembles an inky-black keyhole of cosmic proportions.

This image was created from archival Wide Field Planetary Camera 2 observations that date from shortly after Servicing Mission 3A in 1999. At the time, astronomers believed that the dark patch in NGC 1999 was something called a Bok globule — a dense, cold cloud of gas, molecules, and cosmic dust that blots out background light. However, follow-up observations using a collection of telescopes including ESA’s Herschel Space Observatory revealed that the dark patch is actually an empty region of space. The origin of this unexplained rift in the heart of NGC 1999 remains unknown.