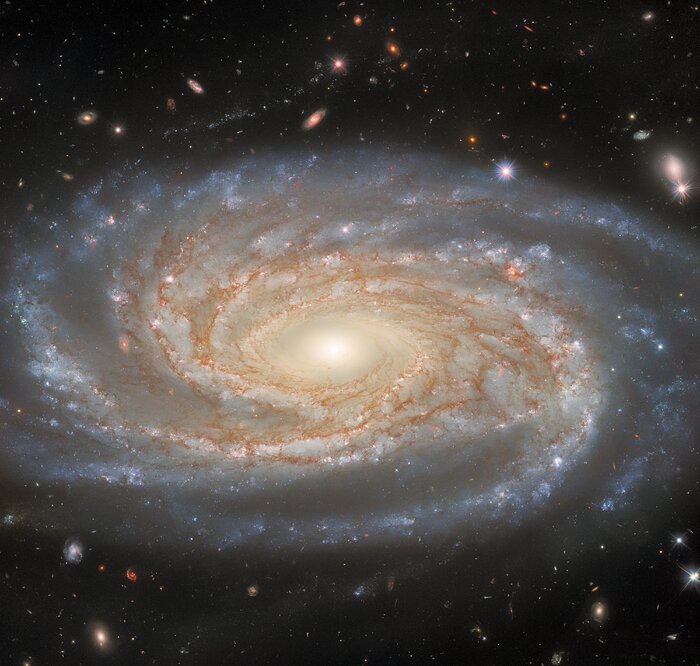 The spiral arms of the galaxy NGC 7038 wind languidly across this image from the NASA/ESA Hubble Space Telescope. NGC 7038 lies around 220 million light-years from Earth in the southern constellation Indus. This image portrays an especially rich and detailed view of a spiral galaxy, and exposes a huge number of distant stars and galaxies around it. That’s because it’s made from a combined 15 hours worth of Hubble time focused on NGC 7038 and collecting light. So much data indicates that this is a valuable target, and indeed, NGC 7038 has been particularly helpful to astronomers measuring distances at vast cosmic scales.

The distances to astronomical objects are determined using an interconnected chain of measurement techniques called the Cosmic Distance Ladder. Each rung in the ladder is calibrated by earlier steps, based on measurements of objects closer to us. This makes the accuracy of distances at the largest scales dependent on how accurately distances to nearby objects can be determined. Hubble inspected NGC 7038 with its Wide Field Camera 3 to calibrate two of the most common distance measurement techniques: type 1A supernovae and Cepheid variables.

One of Hubble's original science goals was to accurately establish distances to night-sky objects, and over its three decades of operation Hubble’s increasingly precise distance measurements have contributed to one of the most intriguing unsolved problems in astronomy. Distance measurements are used to derive a quantity known as the Hubble constant, which captures how fast the Universe is expanding. As astronomer’s measurements of the Hubble constant have become more precise, their value has become increasingly inconsistent with the value of the Hubble Constant derived from observations of the Big Bang’s afterglow. Astronomers have been unable to explain the mismatch between the two values of the Hubble constant, which suggests that a new discovery in cosmology is waiting to be made.

[Image description: An enormous spiral galaxy fills half of the frame, in the centre. It is oval-shaped, with four blue spiral arms winding around it. The galaxy’s centre shines brightly with pale yellow light. Thin strands of orange dust are spread around the centre, following the paths of the arms. Above and below the galaxy, very many small stars and galaxies are visible on the black background.]