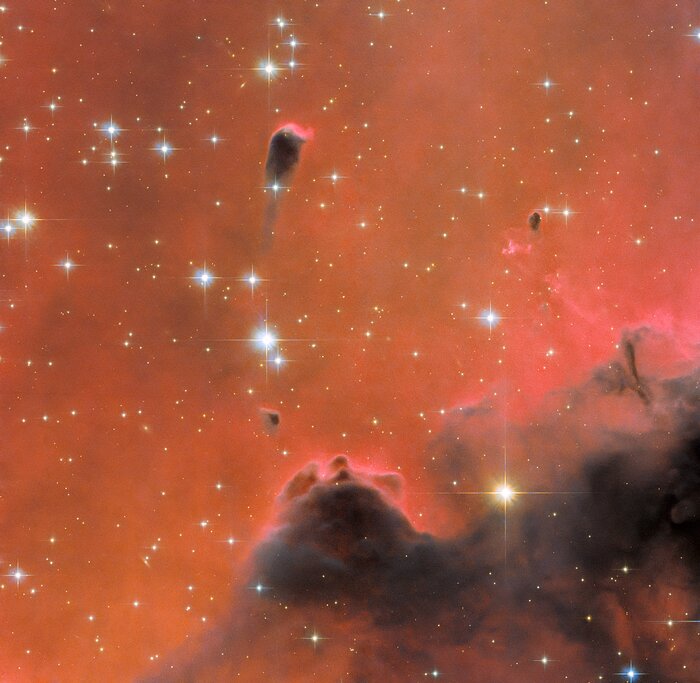 Just in time for the festive season, this new Picture of the Week from the NASA/ESA Hubble Space Telescope features a glistening scene in holiday red. This image shows a small region of the well-known nebula Westerhout 5, which lies about 7000 light-years from Earth. Suffused with bright red light, this luminous image hosts a variety of interesting features, including a free-floating Evaporating Gaseous Globule (frEGG). The frEGG in this image is the small tadpole-shaped dark region in the upper centre-left. This buoyant-looking bubble is lumbered with two rather uninspiring names — [KAG2008] globule 13 and J025838.6+604259.

FrEGGs are a particular class of Evaporating Gaseous Globules (EGGs). Both frEGGs and EGGs are regions of gas that are sufficiently dense that they photoevaporate less easily than the less compact gas surrounding them. Photoevaporation occurs when gas is ionised and dispersed away by an intense source of radiation — typically young, hot stars releasing vast amounts of ultraviolet light. EGGs were only identified fairly recently, most notably at the tips of the Pillars of Creation, which were captured by Hubble in iconic images released in 1995. FrEGGs were classified even more recently, and are distinguished from EGGs by being detached and having a distinct ‘head-tail’ shape. FrEGGs and EGGs are of particular interest because their density makes it more difficult for intense UV radiation, found in regions rich in young stars, to penetrate them. Their relative opacity means that the gas within them is protected from ionisation and photoevaporation. This is thought to be important for the formation of protostars, and it is predicted that many FrEGGs and EGGs will play host to the birth of new stars.

The frEGG in this image is a dark spot in the sea of red light. The red colour is caused by a particular type of light emission known as H-alpha emission. This occurs when a very energetic electron within a hydrogen atom loses a set amount of its energy, causing the electron to become less energetic and this distinctive red light to be released.

[Image description: The background is filled with bright orange-red clouds of varying density. Towards the top-left several large, pale blue stars with prominent cross-shaped spikes are scattered. A small, tadpole-shaped dark patch floats near one of these stars. More of the same dark, dense gas fills the lower-right, resembling black smoke. A bright yellow star and a smaller blue star shine in front of this.]