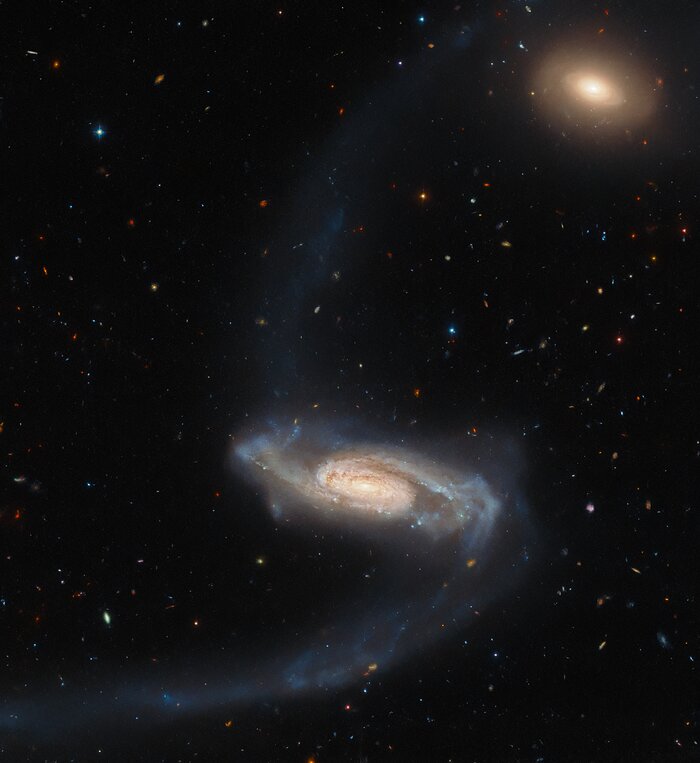 The peculiar spiral galaxy ESO 415-19, which lies around 450 million light-years away, stretches lazily across this image from the NASA/ESA Hubble Space Telescope. While the centre of this object resembles a regular spiral galaxy, long streams of stars stretch out from the galactic core like bizarrely elongated spiral arms. These are tidal streams caused by some chance interaction in the galaxy’s past, and give ESO 415-19 a distinctly peculiar appearance.

ESO 415-19’s peculiarity made it a great target for Hubble. This observation comes from an ongoing campaign to explore the Arp Atlas of Peculiar Galaxies, a menagerie of some of the weirdest and most wonderful galaxies that the Universe has to offer. These galaxies range from bizarre lonesome galaxies to spectacularly interacting galaxy pairs, triplets, and even quintets. These space oddities are spread throughout the night sky, which means that Hubble can spare a moment to observe them as it moves between other observational targets.

This particular observation lies in a part of the night sky contained by the Fornax constellation. This constellation was also the site of a particularly important Hubble observation; the Hubble Ultra Deep Field. Creating the Ultra Deep Field required almost a million seconds of Hubble time, and captured nearly 10,000 galaxies of various ages, sizes, shapes, and colours. Just as climate scientists can recreate the planet’s atmospheric history from ice cores, astronomers can use deep field observations to explore slices of the Universe’s history from the present all the way to when the Universe was only 800 million years old!

[Image description: A spiral galaxy. It has a bright core with patches of dark dust, and fuzzier, dimmer spiral arms in cooler colours, with spots of bright blue. Long, faint tidal streams stretch from the galaxy’s arms: one up to the top of the frame, one curving down to the bottom-left corner. In the top-right there is a smaller, orange elliptical galaxy. The background is studded with many tiny stars and galaxies.]