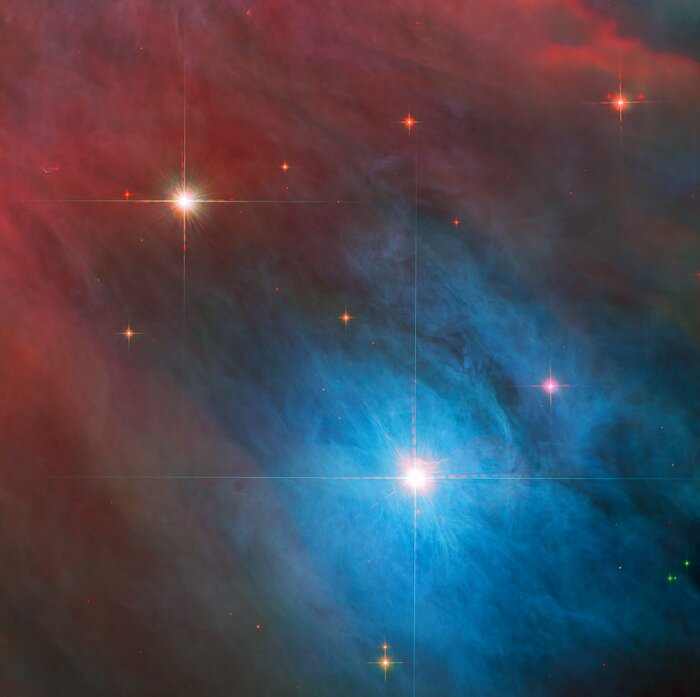 The bright variable star V 372 Orionis takes centre stage in this image from the NASA/ESA Hubble Space Telescope, which has also captured a smaller companion star in the upper left of this image. Both stars lie in the Orion Nebula, a colossal region of star formation roughly 1450 light years from Earth.

V 372 Orionis is a particular type of variable star known as an Orion Variable. These young stars experience some tempestuous moods and growing pains, which are visible to astronomers as irregular variations in luminosity. Orion Variables are often associated with diffuse nebulae, and V 372 Orionis is no exception; the patchy gas and dust of the Orion Nebula pervade this scene.

This image overlays data from two of Hubble’s instruments. Data from the Advanced Camera for Surveys and Wide Field Camera 3 at infrared and visible wavelengths were layered to reveal rich details of this corner of the Orion Nebula. Hubble also left its own subtle signature on this astronomical portrait in the form of the diffraction spikes surrounding the bright stars. These prominent artefacts are created by starlight interacting with Hubble’s inner workings, and as a result they reveal hints of Hubble’s structure. The four spikes surrounding the stars in this image are created by four vanes inside Hubble supporting the telescope’s secondary mirror. The diffraction spikes of the NASA/ESA/CSA James Webb Space Telescope, on the other hand, are six-pointed as a result of Webb’s hexagonal mirror segments and 3-legged support structure for the secondary mirror.

[Image description: Two very bright stars with cross-shaped diffraction spikes are prominent: the larger is slightly lower-right of centre, the smaller lies towards the upper-left corner. Small red stars with short diffraction spikes are scattered around them. The background is covered nearly completely by gas: smoky, bright blue gas around the larger star in the centre and lower-right, and wispier red gas elsewhere.]