A stellar cocoon soon to hatch to a butterfly

Observations with the NASA/ESA Hubble Space Telescope show a previously unknown richness of detail in the intriguing proto-planetary nebula CRL 618. CRL 618 is a superb example of the transition taking place in the later stages of the life of a star like the Sun after it has lost most of its mass and before it emerges as a fully-fledged butterfly-like planetary nebula. CRL 618 is evolving so rapidly that we can literally watch through Hubble's eyes the hatching of one of these heavenly butterflies from its dusty cocoon. This snapshot of cosmic evolution provides important clues for current theories of the origin and evolution of planetary nebulae.

The sharp vision of the NASA/ESA Hubble Space Telescope gives an unprecedented clear view of a fascinating and complex nebula undergoing rapid evolution. The nebula, CRL 618, is an example of a special type of nebula called a proto-planetary nebula. A hidden central star similar to our Sun illuminates a gaseous shell ejected a few hundred years ago by the star late in its life. The star's light escapes at the poles of a thick, dark, equatorial lane of obscuring dust. Here the dust lane is thinner so symmetric nebulous regions can form above and below the equatorial plane.

The Hubble observations show a nebula with complex jet-like features protruding at different angles from the poles - telltale signs of massive outflows of material spewing out at incredible speeds. Outflow speeds of more than 700,000 km/h have been measured in earlier observations. Smoke-ring features are seen in the jets, which may arise from powerful shocks generated as gas is ejected out at irregular intervals and pushes out into the surroundings.

From cocoon to butterfly
Proto-planetary nebulae represent the transition phase between the last stages of a red giant star's life and the later planetary nebula phase where most of the star's mass has been ejected.

Stars, like the Sun, spend most of their life quietly converting hydrogen into helium. However, when the hydrogen in the core is exhausted, they start a short phase of much more rapid evolution. They then grow in size and brightness, become cooler red giants and start to eject large amounts of gas and dust as a slow stellar wind.

When the star has lost most of its mass, it heats up again and brightens so that the ejected material begins to glow. At the same time, a much faster wind starts to sweep through and clear out the cocoon of obscuring material and so a butterfly-like planetary nebula is born.

Snapshots of the cosmic evolution
CRL 618 is one such object in transition from a highly evolved giant star to the planetary nebula phase. The proto-planetary nebula phase is thought to take between a few hundred years and a thousand years. This, astronomically speaking, rapid evolution makes CRL 618 one of the very few astronomical objects where evolutionary changes have been observed directly over the last twenty years and where direct observations of cosmic evolution are possible.

Testing theories
Proto-planetary nebulae are excellent objects on which to test theories of the origin and evolution of planetary nebulae. However the enigmatic structure of this nebula remains a puzzle to astronomers and challenges their theories. This Hubble image shows that as material is ejected it forms complex shapes and symmetries, rather than the spherical structure simple theories predict. Clearly some powerful processes must be at work.

Proto-planetary nebulae often show a bipolar symmetry. Current theories explain this symmetry by invoking binary stars that are rotating around each other, maybe in connection with planetary systems and strong magnetic fields, and that these processes then shape the powerful symmetric jets of ejected gas. Despite being able to observe objects like CRL 618 over periods spanning human generations, and despite its, in a cosmic context, fast changes, we are essentially still observing a snapshot in cosmic time. Alexander Tielens from the Kapteyn Astronomical Institute in the Netherlands, who has studied the nebula with ground-based telescopes, explains: 'We speculate that the protruding jets observed in the Hubble image might be the cause of the more intricate structure seen in more evolved planetary nebulae. Maybe the jets are rotating, or precessing about the central star and 'draw' structures in the gas. The star seems to be using these jets to carve out the butterfly-like structures from its cocoon, which are so prominent during the later planetary nebula phase. If so, we might see pieces of the larger puzzle coming together, greatly helped by Hubble's high resolution.'

Facts about the image

This image comes from the large archive of scientific observations performed with the Hubble Space Telescope. Currently more than 250,000 scientific Hubble observations are contained in this highly valuable archive and more are added all the time.

In this image singly ionised sulphur is shown in red, green represents neutral hydrogen, the blue-green colour comes from neutral oxygen and blue light is continuum light seen through a so-called Stromgren y filter. The full extent of the nebula is 12 arcseconds from tip to tip.

The original Hubble observations were obtained in 1998 by Susan R. Trammell from University of North Carolina, USA, and were turned into a colour image by the Hubble European Space Agency Information Centre at European Southern Observatory, Munich and A.G.G.M. Tielens from the Kapteyn Astronomical Institute in the Netherlands. 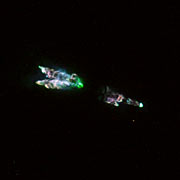