This series of Hubble Space Telescope images captures the ejection of a bright plume of dust following the July 4 collision between an 370 kilogram projectile released by the Deep Impact spacecraft and comet 9P/Tempel 1. The image sequence dramatically shows the evolution of material that was blasted off the comet as it expands and diffuses into interplanetary space.

The sequence of images shows the fan-shaped ejecta expanding at 720 kilometres an hour over a 24-hour period following impact. The upper-left image shows the comet several minutes before impact. The encounter occurred at 7:52 CEST 4 July.

The middle, top image shows that just 12 minutes after the collision, the innermost coma of dust appears 10 times brighter than in the pre-impact photo. The impact caused a brilliant flash of light and a constant increase in the brightness of the inner cloud of dust.

The Hubble telescope continued to monitor the comet, snapping another image [upper right] an hour after the encounter. In this photo, the dust ejected during the impact is expanding outward in the shape of a fan. The debris extends about 720 kilometres from the nucleus. This expansion continues through the bottom series of photos. In the bottom, centre photo, the cloud is 3,200 kilometres across. The last picture in the sequence shows the cloud becoming more diffuse.

The potato-shaped comet is about 13 kilometres long and 4 kilometres wide. Tempel 1's nucleus is too small for the Hubble telescope to resolve. Instead, the bright central region is a combination of light reflected from the nucleus and from dust in the immediate region around the nucleus.

The visible-light images were taken by the Advanced Camera for Surveys' High Resolution Camera. 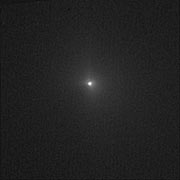 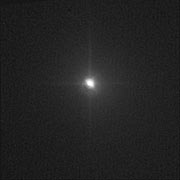 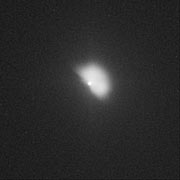 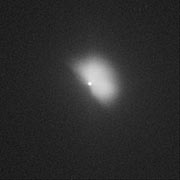 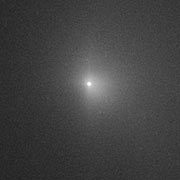 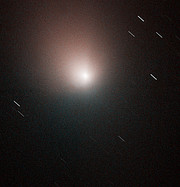