Planet or failed star? Hubble photographs one of the smallest stellar companions ever seen

Astronomers using the NASA/ESA Hubble Space Telescope have photographed one of the smallest objects ever seen around a normal star beyond our Sun. Weighing in at 12 times the mass of Jupiter, the object is small enough to be a planet. The conundrum is that it's also large enough to be a brown dwarf, a failed star.

The Hubble observation of the diminutive companion to the low-mass red dwarf star CHXR 73 is a dramatic reminder that astronomers do not have a consensus in deciding which objects orbiting other stars are truly planets - even though they have at last agreed on how they will apply the definition of "planet" to objects inside our Solar System.

Kevin Luhman of Penn State University, USA, leader of the international team that found the object, called CHXR 73 B, is casting his vote for a brown dwarf. "New, more sensitive telescopes are finding smaller and smaller objects of planetary-mass size," said Luhman. "These discoveries have prompted astronomers to ask the question, are planetary-mass companions always planets?"

Some astronomers suggest that an extrasolar object's mass determines whether it is a planet. Luhman and others advocate that an object is only a planet if it formed from the disk of gas and dust that commonly encircles a newborn star. Our Solar System planets formed 4.6 billion years ago out of a dust disk around our Sun.

Brown dwarfs, by contrast, form just like stars: from the gravitational collapse of large, diffuse clouds of hydrogen gas. Unlike stars, brown dwarfs do not have quite enough mass to ignite hydrogen fusion reactions in their cores, which power stars such as our Sun.

CHXR 73 B is 19.5 billion miles from its red dwarf sun. That's roughly 200 times farther than Earth is from our Sun. At 2 million years old, the star is very young when compared with our middle-aged 4.6-billion-year-old Sun.

"The object is so far away from its star that it is unlikely to have formed in a circumstellar disk," Luhman explained. Disks around low-mass stars are about 5 to 10 billion miles in diameter. There isn't enough material at that distance from the red dwarf to create a planet. Theoretical models show that giant planets like Jupiter form no more than about 3 billion miles from their stars.

Hubble's Advanced Camera for Surveys discovered the object while conducting a survey of free-floating brown dwarfs. Astronomers have found hundreds of brown dwarfs in our galaxy since the first brown dwarfs were spied about a decade ago. Most of them are floating through space and not orbiting stars.

"The study of substellar objects in orbit around a star allows us to determine the age, and over time also the mass of the companion. Such studies help us to improve out understanding of the formation and inner structure of brown dwarfs and planets," says Wolfgang Brandner of the Max-Planck-Institute for Astronomy in Heidelberg, Germany.

One way to further settle the uncertainty would be if a disk of dust could be observed around CHXR 73's companion. Like stars, brown dwarfs have circumstellar disks, too. They would be no more than about 4 billion kilometres in diameter.

NASA's Spitzer Space Telescope has detected disks around several free-floating brown dwarfs. But CHXR 73 B is too close to its star for Spitzer to detect the disk. So astronomers will have to wait for the launch of the NASA/ESA/CSA James Webb Space Telescope in 2013 to determine if this companion has a disk. The Webb telescope will combine Hubble's sharpness, which is needed for detecting close companions, and Spitzer's infrared sensitivity, which is necessary for seeing cool, dusty disks.

The team's result will appear in the Sept. 20 2006 issue of the Astrophysical Journal.

There is a roughly 0.1% probability that CHRX 73 B is a background object that by chance happens to align with CHRX 73. 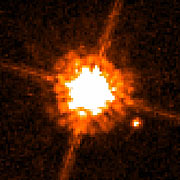