By analysing the COSMOS survey – the largest ever survey undertaken with Hubble – an international team of scientists has assembled one of the most important results in cosmology: a three-dimensional map that offers a first look at the web-like large-scale distribution of dark matter in the Universe. This historic achievement accurately confirms standard theories of structure formation.

For astronomers, the challenge of mapping the Universe has been similar to mapping a city from night-time aerial snapshots showing only streetlights. These pick out a few interesting neighbourhoods, but most of the structure of the city remains obscured. Similarly, we see planets, stars and galaxies in the night sky; but these are constructed from ordinary matter, which accounts in total for only one sixth of the total mass in the Universe. The remainder is a mysterious component - dark matter - that neither emits nor reflects light.

An international team of astronomers led by Richard Massey of the California Institute of Technology (Caltech), USA, has made a three-dimensional map that offers a first look at the web-like large-scale distribution of dark matter in the Universe in unprecedented detail. This new map is equivalent to seeing a city, its suburbs and surrounding country roads in daylight for the first time. Major arteries and intersections are revealed and the variety of different neighbourhoods becomes evident.

The map was derived from largest survey of the Universe made by the Hubble Space Telescope, the Cosmic Evolution Survey (COSMOS), carried out by an international team of 70 astronomers led by Nick Scoville, also of Caltech. The COSMOS survey covers a sufficiently wide area of sky - nine times the area of the full Moon (1.6 square degrees) - for the large-scale filamentary structure of dark matter to be clearly evident. To add 3D distance information, the Hubble observations were combined with spectra from ESO's VLT (Very Large Telescope) and multicolour images from the Japanese Subaru and Canada-France-Hawaii telescopes.

The map provides the best evidence yet that normal matter, largely in the form of galaxies, accumulates along the densest concentrations of dark matter. The map reveals a loose network of filaments, intersecting in massive structures where clusters of galaxies are located.

The map, which stretches halfway back in time to the beginning of the Universe, also reveals how dark matter has recently grown increasingly clumpy as it continues to collapse under gravity.

This milestone takes astronomers from inference to direct observation of dark matter's influence in the Universe. Mapping dark matter's distribution in space and time is fundamental to understanding how galaxies grew and clustered over billions of years. Tracing the growth of clustering in the dark matter may also eventually shed light on dark energy, a force which repels matter rather than attracts it as gravity does, which may have influenced how dark matter clumps.

The map is consistent with conventional theories of how structure formed in the evolving Universe under the relentless pull of gravity, making the transition from a smooth distribution of matter into a sponge-like structure of long filaments.

The results of this research have appeared online today in the journal Nature and will be presented at the 209th meeting of the American Astronomical Society in Seattle, Washington, by Richard Massey for the dark matter and Nick Scoville for the galaxies.

"It's reassuring how well our map confirms the standard theories for structure formation." Massey said. He calls dark matter the scaffolding surrounding the assembly sites of stars and galaxies over billions of years.

"To achieve this result, we extended gravitational lensing techniques - previously used to map the dark matter distribution in clusters of galaxies - and applied these in the COSMOS field to reveal a 3D dark matter" said co-investigator Jean-Paul Kneib of Observatoire Astronomique Marseille Provence.

"Although this technique has been employed previously, the depth of the COSMOS image and its superior resolution enables a more precise and detailed map, covering a large enough area to see the extended filamentary structures," said co-investigator Richard Ellis of Caltech.

A separate COSMOS team led by Nick Scoville of Caltech presented images of the large scale galactic structures in the same area as the dark matter. Galaxies appear in visible light seen with Hubble and in ground-based Subaru telescope images obtained by Yoshiaku Taniguchi and colleagues. The hot gas in the densest galaxy clusters was imaged in X-rays by Günther Hasinger and colleagues using the European Space Agency's XMM-Newton telescope.

"This is the first serendipitous detection of galaxy clusters through lensing and X-ray observations", says Günther Hasinger, leader of the XMM-Newton observations. He continues: "Only through the availability of the excellent multi-wavelength dataset, in particular the XMM-Newton Survey, was it possible to confirm the excellent correspondence between the clusters discovered first in X-rays and then independently in the lensing mass maps."

Galaxy structures inside the dark matter "scaffolding" show clusters of galaxies in the process of assembly. These structures can be traced across more than 80 million light-years in the COSMOS survey - approximately five times the extent of the nearby Virgo galaxy cluster. In the densest early Universe structures, many galaxies already have old stellar populations, implying that these galaxies formed first and accumulated the greatest masses in a "bottom-up" assembly process whereby smaller galaxies merge to make bigger galaxies - like tributaries converging to form a large river.

The COSMOS survey shows that galaxies with on-going star formation, even to the present epoch, dwell in less populated voids and dark matter filaments. "It is remarkable how the environment on the enormous cosmic scales seen in the dark matter structures can influence the properties of individual stars and galaxies - both the maturity of the stellar populations and the progressive "down-sizing" of star formation regions to smaller galaxies is clearly dependent on the dark matter environment." said Scoville.

"The comparison is of fundamental importance," said Massey. "Almost all current scientific knowledge concerns only baryonic matter. Now that we have begun to map out where dark matter is, the next challenge is to determine what it is, and specifically its relationship to normal matter."

The COSMOS survey (Hubble Space Telescope Cosmic Evolution Survey) has proven an invaluable dry run for future dedicated weak lensing missions in space. In fact the new 3D dark matter map resembles the first maps of the large-scale distribution of galaxies created from the measured light of galaxies 15 years ago. These maps have subsequently become incredibly detailed, and could be an indicator of future improvements in mapping dark matter.

In making the COSMOS survey, Hubble photographed 575 slightly overlapping views of the Universe using the Advanced Camera for Surveys (ACS) onboard Hubble. It took nearly 1,000 hours of observations and is the largest project ever conducted with Hubble. Multicolour information of the galaxies in the COSMOS field have been obtained with the Subaru and CFHT telescopes in Hawaii. Thousands of galaxy spectra were obtained with the European Southern Observatory's VIMOS instrument on the Very Large Telescope and the Magellan telescope in Chile. The distribution of the normal matter was partly determined with the European Space Agency's XMM/Newton telescope. 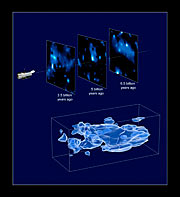 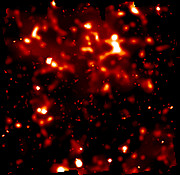 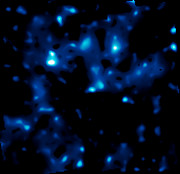 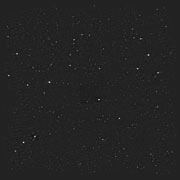 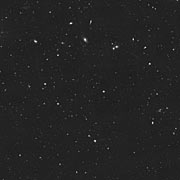 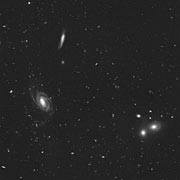 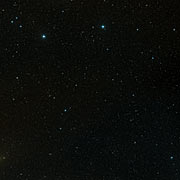 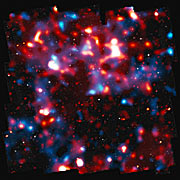