A powerful collision between galaxy clusters has been captured by the NASA/ESA Hubble Space Telescope and NASA's Chandra X-ray Observatory. This clash of clusters provides striking evidence for dark matter and insight into its properties.

New Hubble and Chandra observations of the cluster known as MACSJ0025.4-1222 indicate that a titanic collision has separated dark from ordinary matter. This provides independent confirmation of a similar effect detected previously in a target dubbed the Bullet Cluster, showing that the Bullet Cluster is not an anomalous case.

MACSJ0025 formed after an enormously energetic collision between two large clusters. Using visible-light images from Hubble, astronomers were able to infer the total mass distribution of dark and ordinary matter. Hubble was used to map the dark matter (coloured in blue) using a technique known as gravitational lensing. Chandra data enabled the astronomers to accurately map the ordinary matter, mostly in the form of hot gas, which glows brightly in X-rays (shown in pink).

As the two clusters that formed MACSJ0025 (each almost a whopping quadrillion times the mass of our Sun) merged at speeds of millions of kilometres per hour, hot gas in the two clusters collided and slowed down, but the dark matter passed right through this smash-up. The separation between material shown in pink and blue therefore provides observational evidence for dark matter and supports the view that dark matter particles interact with each other only very weakly or not at all, apart from the pull of gravity.

The international team of astronomers in this study was led by Maruša Bradač of the University of California, Santa Barbara, USA, and Steve Allen of the Kavli Institute for Particle Astrophysics and Cosmology at Stanford University and the Stanford Linear Accelerator Center (SLAC), USA. Their results will appear in an upcoming issue of The Astrophysical Journal. 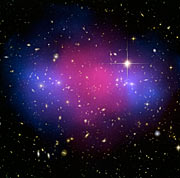