To commemorate the NASA/ESA Hubble Space Telescope's 19 years of success, the orbiting telescope has photographed a peculiar system of galaxies known as Arp 194. This interacting group contains several galaxies along with a "cosmic fountain" of stars, gas and dust that stretches over 100 000 light years.

Over the past 19 years Hubble has taken dozens of exotic pictures of galaxies going "bump in the night" as they collide with each other and have a variety of close encounters of the galactic kind. Just when you thought these interactions couldn’t look any stranger, this image of a trio of galaxies, called Arp 194, looks as if of the galaxies has sprung a leak. The bright blue streamer is really a stretched spiral arm full of newborn blue stars. This typically happens when two galaxies interact and gravitationally tug at each other gravitationally.

Resembling a pair of owl's eyes, the two nuclei of the colliding galaxies can be seen in the process of merging at the upper left. The bizarre blue bridge of material extending out from the northern component looks as if it connects to a third galaxy but in reality this galaxy is in the background and not connected at all. Hubble's sharp view allows astronomers to try and sort out visually which are the foreground and background objects when galaxies, superficially, appear to overlap.

The blue "fountain" is the most striking feature of this galaxy troupe and it contains complexes of super star clusters that may have as many as dozens of individual young star clusters in them. It formed as a result of the interactions among the galaxies in the northern component of Arp 194. The gravitational forces involved in a galaxy interaction can enhance the star formation rate and give rise to brilliant bursts of star formation in merging systems.

Hubble's resolution shows clearly that the stream of material lies in front of the southern component of Arp 194, as shown by the dust that is silhouetted around the star cluster complexes.

The details of the interactions among the multiple galaxies that make up Arp 194 are complex. The system was most likely disrupted by a previous collision or close encounter. The shapes of all the galaxies involved have been distorted by their gravitational interactions with one another.

Arp 194, located in the constellation of Cepheus, resides approximately 600 million light-years away from Earth. Arp 194 is one of thousands of interacting and merging galaxies known in our nearby Universe. These observations were taken in January 2009 with the Wide Field Planetary Camera 2. Blue, green and red filters were composited together to form this rather picturesque image of a galaxy interaction.

This picture was issued to celebrate the 19th anniversary of the launch of the Hubble Space Telescope aboard the space shuttle Discovery in 1990. Hubble has made more than 880 000 observations and snapped over 570 000 images of 29 000 celestial objects over the past 19 years. 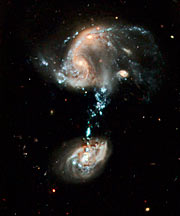 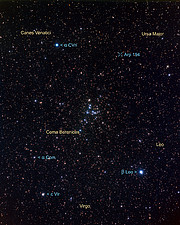