The historic and successful Hubble Servicing Mission 4 concluded with a trouble-free Space Shuttle landing on Sunday. During a series of unprecedented spacewalks, astronauts replaced and repaired a total of four instruments. The Wide Field Camera 3 and Cosmic Origins Spectrograph were installed and the Advanced Camera for Surveys and Space Telescope Imaging Spectrograph were successfully repaired.

The remarkably successful Servicing Mission 4 — the fifth and final visit of the Space Shuttle to the NASA/ESA Hubble Space Telescope — came to an end with a picture-perfect landing at Edwards Air Force Base in California on Sunday.

Servicing Mission 4 was an intense, 13-day undertaking that revitalised Hubble, making the telescope more capable than ever. All mission objectives were accomplished during five spacewalks that totalled 36 hours, 56 minutes.

During the spacewalks the astronauts delivered two new instruments. The Wide Field Camera 3 (WFC3), which replaced the workhorse WFPC2, is the first single instrument on Hubble to be able to image across the infrared, visible and ultraviolet wavebands. The Cosmic Origins Spectrograph (COS) will help astronomers to determine the chemical composition and evolution of the Universe. Both instruments use advanced technology to improve Hubble's potential for discovery dramatically and enable observations of the faint light from young stars and galaxies in the Universe.

Astronauts were also able to repair the Advanced Camera for Surveys (ACS) and the Space Telescope Imaging Spectrograph (STIS) that were both affected by power failures. A nail-biting moment occurred when the astronauts had to conquer a stubborn bolt on a handrail attached to STIS before taking on the tall task of removing 111 screws to access the instrument's power supply card. ACS's powerful imaging capabilities at ultraviolet and optical wavelengths are now both available, although its High Resolution Channel could not be fixed. ACS now perfectly complements the powerful new Wide Field Camera 3, and the duo will be vital for the study of dark energy and dark matter.

Constant monitoring of the angles of Hubble's solar panels, which are turned by drive mechanisms with associated control electronics, was the duty of a specialised team of engineers led by Michael Eiden, ESA HST Project Manager for the Science and Robotic Exploration Directorate. The team of four worked 12-hour shifts to provide 24-hour coverage for the entire mission, supervising the positioning of the telescope's "wings", so as to ensure the safety of spacewalkers and maintain the integrity of the solar array hardware.

"We are elated with the performance of ESA's Solar Array Drive Electronics and Solar Array Drive Mechanisms — they performed flawlessly", said Eiden. "I have worked on all of the servicing missions, but to be able to support the last mission to this extraordinary telescope was particularly gratifying".

ESA contributed both engineering and financial support, with 15 percent of Hubble's development costs covered by the Agency. In return European astronomers receive a guaranteed 15 percent share of observing time. This fraction of European time reached peaks of more than 25 percent.

"Extending Hubble's mission and increasing its capabilities gives scientists, both in Europe and worldwide, new tools to learn even more about our Universe and our origins. The addition of Hubble's renewed capabilities to those just brought to space by ESA's Herschel and Planck telescopes, launched last week, puts an impressive array of complementary and powerful tools at the disposal of scientists, and makes this a great moment for the International Year of Astronomy", said David Southwood, ESA Director of Science and Robotic Exploration. "These space missions are bringing an enormous boost to our attempts to unlock the mysteries of the cosmos and decode its history".

Hubble's upgrade is expected to extend the iconic telescope's life until 2014. In that same year, the NASA/ESA/CSA James Webb Space Telescope (JWST) will launch. JWST is the successor to the Hubble Space Telescope, and its mirror will have a diameter almost three times that of Hubble's. JWST has been designed to study the very distant Universe in infrared light, looking for the first stars and galaxies.Hubble will now begin a period of extensive testing and calibration. The first images from the new and repaired instruments are expected to be released in September.

The Hubble Space Telescope is a project of international cooperation between ESA and NASA. It was launched in 1990. The partnership agreement between ESA and NASA was signed on 7 October 1977; as a result of this agreement European astronomers have guaranteed access to 15 percent of Hubble's observing time.

CSA is the Canadian Space Agency. 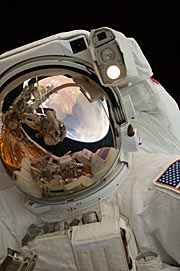