The best recognised, longest-lived and most prolific space observatory zooms past a milestone of 20 years of operation. On 24 April 1990, the Space Shuttle and crew of STS-31 were launched to deploy the NASA/ESA Hubble Space Telescope into a low-Earth orbit. What followed was one of the most remarkable sagas of the space age.

Hubble’s unprecedented capabilities have made it one of the most powerful science instruments ever conceived by humans, and certainly the one most embraced by the public. Hubble’s discoveries have revolutionised nearly all areas of current astronomical research, from planetary science to cosmology. And, its pictures are unmistakably out of this world.

At times Hubble’s starry odyssey has played out like a space soap opera: with broken equipment, a bleary-eyed primary mirror and even a Space Shuttle rescue/repair mission cancellation. But the ingenuity and dedication of Hubble scientists, engineers, and NASA and ESA astronauts have allowed the observatory to rebound time and time again. Its crisp vision continues to challenge scientists with exciting new surprises and to enthral the public with ever more evocative colour images.

NASA, ESA and the Space Telescope Science Institute (STScI) are celebrating Hubble’s journey of exploration with a stunning new picture. Another exciting component of the anniversary will be the launch of the revamped European website for Hubble, spacetelescope.org. ESA will also be sponsoring the Hubble Pop Culture Contest that calls for fans to search for examples of the observatory’s presence in everyday life (http://www.spacetelescope.org/hubblepopculture).

The brand new Hubble anniversary image highlights a small portion of one of the largest observable regions of starbirth in the galaxy, the Carina Nebula. Towers of cool hydrogen laced with dust rise from the wall of the nebula. The scene is reminiscent of Hubble’s classic Pillars of Creation photo from 1995, but even more striking in appearance. The image captures the top of a pillar of gas and dust, three light-years tall, which is being eaten away by the brilliant light from nearby bright stars. The pillar is also being pushed apart from within, as infant stars buried inside it fire off jets of gas that can be seen streaming from towering peaks like arrows sailing through the air.

Hubble fans worldwide are being invited to share the ways in which the telescope has affected them. They can send an e-mail, post a Facebook message (to https://www.facebook.com/hubbleESA/) or use the Twitter hashtag #hst20. Or, they can visit the “Messages to Hubble” page on http://hubblesite.org, type in their entry and read selections from other messages that have been received. Fan messages will be stored in the Hubble data archive along with the telescope’s many terabytes of science data. Future researchers will be able to read these messages and understand how Hubble had such an impact on the world.

To date, Hubble has looked at over 30 000 celestial targets and amassed over half a million pictures in its archive. The last heroic astronaut-servicing mission to Hubble in May 2009 made the telescope 100 times more powerful than when it was launched. In addition to its irreplaceable scientific importance, Hubble brings cosmic wonders into millions of homes and schools every day. For the past 20 years the public has become co-explorers with this wondrous observatory. 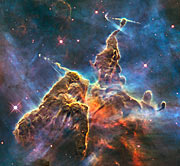 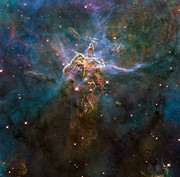 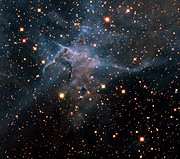 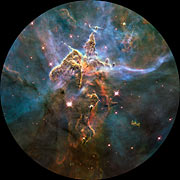