A heavy runaway star rushing away from a nearby stellar nursery at more than 400 000 kilometres per hour, a speed that would get you to the Moon and back in two hours. The runaway is the most extreme case of a very massive star that has been kicked out of its home by a group of even heftier siblings. Tantalising clues from three observatories, including the NASA/ESA Hubble Space Telescope’s newly installed Cosmic Origins Spectrograph (COS), and some old-fashioned detective work, suggest that the star may have travelled about 375 light-years from its suspected home, a giant star cluster called R136.

The homeless star is on the outskirts of the 30 Doradus Nebula, a raucous stellar breeding ground in the nearby Large Magellanic Cloud. The finding bolsters evidence that the most massive stars in the local Universe reside in 30 Doradus, making it a unique laboratory for studying heavyweight stars. 30 Doradus, also called the Tarantula Nebula, is roughly 170 000 light-years from Earth. Nestled in the core of 30 Doradus, R136 contains several stars topping 100 solar masses each.

The observations offer insights into how massive star clusters behave.

“These results are of great interest because such dynamical processes in very dense, massive clusters have been predicted theoretically for some time, but this is the first direct observation of the process in such a region,” says Nolan Walborn of the Space Telescope Science Institute in Baltimore and a member of the COS team that observed the misfit star. “Less massive runaway stars from the much smaller Orion Nebula Cluster were first found over half a century ago, but this is the first potential confirmation of more recent predictions applying to the most massive young clusters.”

Runaway stars can be made in a couple of ways. A star may encounter one or two heavier siblings in a massive, dense cluster and get booted out through a stellar game of pinball. Or, a star may get a “kick” from a supernova explosion in a binary system, with the more massive star exploding first.

“It is generally accepted, however, that R136 is young enough that the cluster’s most massive stars have not yet exploded as supernovae,” says COS team member Danny Lennon of the Space Telescope Science Institute. “This implies that the star must have been ejected through dynamical interaction.”

The runaway star research team, led by Chris Evans of the Royal Observatory Edinburgh, UK, published the study’s results on 5 May 2010 in the online edition of The Astrophysical Journal Letters.

Astronomers have been on the trail of this rogue star since 2006 when a team led by Ian Howarth of University College London, UK, spotted it with the Anglo-Australian Telescope at Siding Spring Observatory. The observation revealed that the stellar misfit is an exceptionally hot, massive blue-white star and relatively far from any cluster in which such stars are usually found.

Hubble astronomers unexpectedly picked up another clue when they used the star as a target to calibrate the COS instrument, installed in May 2009 during Servicing Mission 4. Those ultraviolet spectroscopic observations, made in July 2009, showed that the wayward star is unleashing a fury of charged particles in one of the most powerful stellar winds known, a clear sign that it is extremely massive, perhaps as much as 90 times heavier than the Sun. The star, therefore, also must be very young, about one million to two million years old, because extremely massive stars only live for a few million years.

Sifting through Hubble’s archive of images, astronomers found another important piece of evidence. An optical image of the star taken by the Wide Field Planetary Camera 2 in 1995 revealed that it is at one end of an egg-shaped cavity. The cavity’s glowing edges stretch behind the star and point in the direction of its home in 30 Doradus.

Another spectroscopic study from the European Southern Observatory’s Very Large Telescope (VLT) at the Paranal Observatory in Chile revealed that the star’s velocity is constant and not a result of orbital motion in a binary system. Its velocity corresponds to an unusual motion relative to the star’s surroundings, evidence that it is a runaway star.

The study also confirmed that the light from the runaway is from a single massive star rather than the combined light of two lower mass stars. In addition, the observation established that the star is about ten times hotter than the Sun, a temperature that is consistent with a high-mass object.

The VLT observations are part of a legacy programme called the VLT-FLAMES Tarantula Survey. The survey, conducted by an international team led by Chris Evans of the Royal Observatory, comprises more than 900 stars in the 30 Doradus region. Like the COS observations of the star, the FLAMES results also were serendipitous. The star’s location is far from the nebula’s central region, placing it at the edge of the FLAMES survey field.

The renegade star may not be the only runaway in the region. Two other extremely hot, massive stars have been spotted beyond the edges of 30 Doradus. Astronomers suspect that these stars, too, may have been ejected from their home. They plan to analyse the stars in detail to determine whether 30 Doradus might be unleashing a barrage of massive stellar runaways into the surrounding neighbourhood.

The wayward star will continue to streak across space, says team member Paul Crowther of the University of Sheffield in England, and will eventually end its life in a titanic supernova explosion, likely leaving behind a remnant black hole. 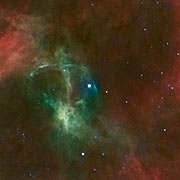