Astronomers take a step towards revealing the Universe's biggest mystery

An international team of astronomers using gravitational lensing observations from the NASA/ESA Hubble Space Telescope has taken an important step forward in the quest to solve the riddle of dark energy, a phenomenon which mysteriously appears to power the Universe's accelerating expansion. Their results appear in the 20 August 2010 issue of the journal Science.

Normal matter like that found in stars, planets and dust clouds only makes up a tiny fraction of the mass–energy content of the Universe. It is dwarfed by the amount of dark matter — which is invisible, but can be detected by its gravitational pull. In turn, the amount of dark matter in the Universe is itself overwhelmed by the diffuse dark energy that permeates the entire Universe. Scientists believe that the pressure exerted by this dark energy is what pushes the Universe to expand at an ever-increasing rate.

Probing the nature of dark energy is, therefore, one of the key challenges in modern cosmology. Since its discovery in 1998, the quest has been to characterise and understand it better. This work presents an entirely new way to do so.

Eric Jullo, lead author of a new paper in the journal Science explains: “Dark energy is characterised by the relationship between its pressure and its density: this is known as its equation of state. Our goal was to try to quantify this relationship. It teaches us about the properties of dark energy and how it has affected the development of the Universe.”

The team measured the properties of the gravitational lensing in the galaxy cluster Abell 1689. Gravitational lensing is a phenomenon predicted by Einstein’s theory of general relativity, and was here used by the team to probe how the cosmological distances (and thus the shape of space-time) are modified by dark energy. At cosmic distances, a huge cluster of galaxies in the foreground has so much mass that its gravitational pull bends beams of light from very distant galaxies, producing distorted images of the faraway objects. The distortion induced by the lens depends in part on the distances to the objects, which have been precisely measured with large ground-based telescopes such as ESO’s Very Large Telescope and the Keck Telescopes.

“The precise effects of lensing depend on the mass of the lens, the structure of space-time, and the relative distance between us, the lens and the distant object behind it,” explains Priyamvada Natarajan, a co-author of the paper. “It’s like a magnifying glass, where the image you get depends on the shape of the lens and how far you hold it from the object you’re looking at. If you know the shape of the lens and the image you get, you can work out the path that light followed between the object and your eye.”

Looking at the distorted images allows astronomers to reconstruct the path that light from distant galaxies takes to make its long journey to Earth. It also lets them study the effect of dark energy on the geometry of space in the light path from the distant objects to the lensing cluster and then from the cluster to us. As dark energy pushes the Universe to expand ever faster, the precise path that the light beams follow as they travel through space and are bent by the lens is subtly altered. This means that the distorted images from the lens encapsulate information about the underlying cosmology, as well as about the lens itself.

So why is the geometry of the Universe such a big issue?

The real strength of this new result is that it devises a totally new way to extract information about the elusive dark energy. It is a unique and powerful one, and offers great promise for future applications.

According to the scientists, their method required multiple, meticulous steps to develop. They spent several years developing specialised mathematical models and precise maps of the matter — both dark and “normal” — that together constitute the Abell 1689 cluster.

Co-author Jean-Paul Kneib explains: “Using our unique method in conjunction with others, we were able to come up with results that were far more precise than any achieved before.” 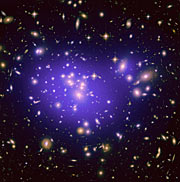 PR Image heic1014b
Distribution of light and mass in Abell 1689