Two views of a lopsided galaxy

The Meathook Galaxy, or NGC 2442, has a dramatically lopsided shape. One spiral arm is tightly folded in on itself and host to a recent supernova, while the other, dotted with recent star formation, extends far out from the nucleus. The NASA/ESA Hubble Space Telescope and the MPG/ESO 2.2-metre telescope have captured two contrasting views of this asymmetric spiral galaxy.

The Meathook Galaxy, or NGC 2442, in the southern constellation of Volans (The Flying Fish), is easily recognised for its asymmetric spiral arms. The galaxy’s lopsided appearance is thought to be due to gravitational interactions with another galaxy at some point in its history — though astronomers have not so far been able to positively identify the culprit.

A close-up image from the NASA/ESA Hubble Space Telescope focuses on the galaxy’s nucleus and the more compact of its two spiral arms. In 1999, a massive star at the end of its life exploded in this arm in a supernova. By comparing older ground-based observations, previous Hubble images made in 2001, and these shots taken in late 2006, astronomers have been able to study in detail what happened to the star in its dying moments. By the time of this image the supernova itself had faded and is not visible.

A much broader view, taken by the Wide Field Imager on the MPG/ESO 2.2-metre telescope at La Silla, Chile, very clearly shows the double hook shape that gives the galaxy its nickname. This image also captures several other galaxies close to NGC 2442 as well as many more remote galaxies that form a rich backdrop. Although the Wide Field Imager, on the ground, cannot approach the sharpness of images from Hubble in space, it can cover a much bigger section of sky in a single exposure. The two tools often provide complementary information to astronomers.

ESO’s observations also highlight the other end of the life cycle of stars from Hubble. Dotted across much of the galaxy, and particularly in the longer of the two spiral arms, are patches of pink and red. This colour comes from hydrogen gas in star-forming regions: as the powerful radiation of new-born stars excites the gas in the clouds they formed from, it glows a bright shade of red.

The interaction with another galaxy that gave the Meathook Galaxy its unusual asymmetric shape is also likely to have been the trigger of this recent episode of star formation. The same tidal forces that deformed the galaxy disrupted clouds of gas and triggered their gravitational collapse. 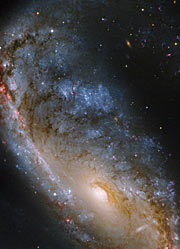 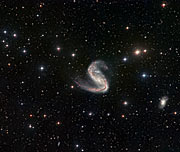 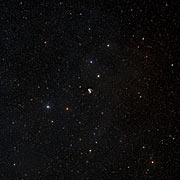 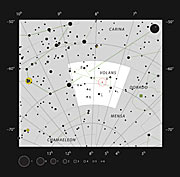 PR Image heic1108d
The Meathook galaxy, NGC 2442, in the constellation of Volans

PR Video heic1108a
Zooming in on the Meathook Galaxy