A family portrait of galaxies

Two very different galaxies feature in this family portrait taken by the NASA/ESA Hubble Space Telescope, together forming a peculiar galaxy pair called Arp 116. The image shows the dramatic differences in size, structure and colour between spiral and elliptical galaxies.

Arp 116 is composed of a giant elliptical galaxy known as Messier 60, and a much smaller spiral galaxy, NGC 4647.

Being a typical elliptical galaxy, Messier 60 on its own may not be very exciting to look at, but together with its adjacent spiral friend, the pair becomes a rather interesting feature in the night sky.

Messier 60 is very bright — the third brightest in the Virgo cluster of galaxies, a collection of more than 1300 galaxies. It is noticeably larger than its neighbour, and has a far higher mass of stars. M 60, like other elliptical galaxies, has a golden colour because of the many old, cool and red stars in it. NGC 4647, on the other had, has many young and hot stars that glow blue, giving the galaxy a noticeably different hue.

Astronomers have long tried to determine whether these two galaxies are actually interacting. Although they overlap as seen from Earth, there is no clear evidence of vigorous new star formation. In interacting pairs of galaxies, the mutual gravitational pull that the galaxies exert on each other typically disrupts gas clouds, much like tides on Earth are caused by the Moon’s gravity. This disruption can cause gas clouds to collapse, forming a sudden burst of new stars.

Although this does not appear to have happened in Arp 116, studies of very detailed Hubble images suggest the onset of some tidal interaction between the two.

Regardless of whether they are actually close enough to be interacting, however, the two galaxies are certainly near neighbours. This means we see the two galaxies at the same scale, making Hubble’s family portrait a textbook example of how giant elliptical galaxies differ in size, structure and colour from their smaller spiral brethren.

Surprisingly Messier 60 was discovered independently by three different astronomers in 1779. Johann Gottfried Koehler of Dresden first spotted it on 11 April that year while observing a comet, the Italian Barnabus Oriani noticed it a day later, and the French Charles Messier saw it on 15 April. Charles Messier then listed the galaxy in the Messier Catalogue.

Having photographed the galaxy pair with the 5-metre Hale telescope, US astronomer Halton Arp included it in his Atlas of Peculiar Galaxies, published in 1966. The catalogue contains images of 338 “peculiar galaxies” — merging, overlapping and interacting galaxies.

This large image is a mosaic of images in visible and infrared light taken by Hubble’s Advanced Camera for Surveys and Wide Field and Planetary Camera 2. 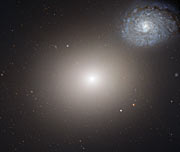