Astronomers using the NASA/ESA Hubble Space Telescope have uncovered seven primitive galaxies from a distant population that formed more than 13 billion years ago. In the process, their observations have put forward a candidate for the record for the most distant galaxy found to date (at redshift 11.9), and have shed new light on the earliest years of cosmic history. The galaxies are seen as they were when the Universe was less than 4 percent of its present age.

A team of scientists using the Hubble Space Telescope has made new observations of the Hubble Ultra Deep Field (see heic0406, heic0916), as part of a project to improve our understanding of the early years of the Universe.

The resulting images offer the deepest ever view of the Universe at near-infrared wavelengths, which capture the redshifted [1] light of early galaxies. Because light takes so long to travel from these remote objects, astronomers are looking back in time, seeing these galaxies as they appeared 600 million years after the Big Bang (the Universe is now 13.7 billion years old). One object spotted by the team may be the most distant ever observed.

The new data have allowed the team, co-led by Richard Ellis (Caltech, USA) and Ross McLure (University of Edinburgh, UK), to uncover six previously-unknown galaxies in this era, and to rule out a number of tentative identifications of distant galaxies made by other scientists in previous research. This is the first statistically robust census of galaxies at such an early time in cosmic history, and shows that the number of galaxies steadily increased with time, supporting the idea that the first galaxies didn’t form in a sudden burst but gradually assembled their stars.

One previously-claimed candidate extreme redshift galaxy in the Hubble Ultra Deep Field was confirmed by the team. This is UDFj-39546284, for a while claimed to be the most distant known galaxy, at redshift 10 (heic1103). However, the improved and extended dataset has allowed the scientists to shed unexpected new light on this object, showing that it either lies at an even greater distance than previously thought (at a redshift of 11.9, handing it back the distance record), or must otherwise be a previously unknown type of extreme emission-line galaxy at much lower redshift [2].

“Our study has taken the subject forward in two ways,” says Ellis. “First, we have used Hubble to make longer exposures than previously. The added depth is essential to reliably probe the early period of cosmic history. Second, we have used Hubble’s available colour filters very effectively to measure galaxy distances more precisely.”

Studying galaxies in the early years of the Universe is fraught with difficulties. Scientists are working at the very limits of what Hubble is capable of, and must grapple with sometimes ambiguous data. A number of tentative identifications of distant galaxies have been disproved in the past, and this project is designed in part to improve the quality of data available [3].

Part of this involves taking additional data through filters which have already been used to take deep images of the Hubble Ultra Deep Field, but the team has also added new imaging through previously unexploited filters. “We added an additional filter, and undertook much deeper exposures in some filters than in earlier work in order to convincingly reject the possibility that some of our galaxies might be foreground objects,” said team member James Dunlop (University of Edinburgh, UK).

The observations, part of a project called Hubble Ultra Deep Field 2012 (UDF 2012), were made over a period of six weeks during August and September 2012, and the first results are now appearing in a series of scientific papers. The UDF 2012 team is publicly releasing these unique data before the end of the year, after preparing them for other research groups to use.

A major goal of the new program was to determine how rapidly the number of galaxies increased over time in the early Universe. This measure is the key evidence for how quickly galaxies build up their constituent stars.

The results from the UDF 2012 campaign suggest there will be many undiscovered galaxies even deeper in space waiting to be revealed by the forthcoming James Webb Space Telescope, which will be launched in 2018.

The team’s finding on the distant galaxy census has been accepted for publication in The Astrophysical Journal Letters.

The research is presented in a paper entitled “The abundance of star-forming galaxies in the redshift range 8.5 to 12: new results from the 2012 Hubble Ultra Deep Field campaign,” accepted for publication in the the Astrophysical Journal Letters.

[1] Astronomers plumb the depths of the Universe, and probe its history, by measuring how much the light from an object has been stretched by the expansion of space. This is called the redshift value or z. The greater the observed z value for a galaxy, the more distant it is in time and space, as observed from our position in the Milky Way. Before Hubble was launched, astronomers could only see galaxies out to a z of approximately 1, corresponding to an era halfway through the history of the Universe. The original Hubble Deep Field, taken in 1995, leapfrogged to z = 4, or roughly 90 percent of the way back to the beginning of time. The Advanced Camera for Surveys (ACS) produced the Hubble Ultra Deep Field of 2004, pushing back the limit to z ~ 6. ACS was installed on Hubble during Servicing Mission 3B in 2002. Hubble’s first infrared camera, the Near Infrared Camera and Multi-Object Spectrometer reached out to z = 7. The Wide Field Camera 3 (WFC3) first took us back to z ~ 8, and has now plausibly penetrated back for the first time to z ~ 12. The James Webb Space Telescope is expected to extend this back to a z of approximately 15, 275 million years after the Big Bang, and possibly beyond. The very first stars may have formed between redshifts 30 and 15.

[2] The observations taken through the 1400nm filter, in which UDFj-39546284 was not visible, showed that the galaxy may be more distant than previously thought (as it only appears in the redder 1600nm filter). The additional observations through the 1600nm filter, in which the galaxy is visible, gave additional confidence that the galaxy is indeed real. There remains a small possibility that the object could be an extreme emission-line galaxy at much more modest distances (between redshift 2 and 3), but if this is the case then the object would have to be a previously undiscovered type of extreme emission-line galaxy. This hypothesis cannot be fully excluded until the object’s spectrum has been studied. This will not be possible until the the James Webb Space Telescope comes online in 2018. However, the balance of the available evidence favours the interpretation that this is the most distant object seen to date.

[3] Because the distance to faraway galaxies is measured by the extent to which their light is reddened by the expansion of the cosmos, accurate and comprehensive measurements of brightnesses at different wavelengths (i.e. different colours of light) is essential for studying the Universe’s early years. The only way to make unambiguous measurements of redshift (and hence distance) is using spectroscopy, in which the light of a galaxy is dispersed into a rainbow, much like a prism does with white light. This gives a full profile of the colours of a galaxy, allowing astronomers to identify key features in the spectrum produced by known chemical elements at specific wavelengths. The way these features are shifted can be used to make very precise measurements of redshift. In particular, the position of these features let scientists distinguish whether a galaxy has indeed been reddened by the expansion of the cosmos (and so is very distant) or whether it is simply intrinsically red (in which case it could be much closer), because the method does not rely on the overall redness of the object, but on specific identifiable spectral features.

However, spectroscopy of objects as faint as those uncovered in this study is not feasible with current facilities. Instead, the astronomers have used what is, in effect, a crude version of spectroscopy, based on making images through ten different filters which cover the optical-to-near-infrared spectral region. This enables the broad spectral shape — but not the detailed features — of the light from a galaxy to be established. In this case, the method enabled the scientists to search for a characteristic sharp “step” in the galaxy spectrum, produced by the absorption of all very blue ultraviolet light by the neutral hydrogen gas which pervaded the Universe during most of the first billion years of cosmic history. The carefully chosen near-infrared filters exploited in this new study enabled this technique to be extended up to redshifts as high as 12 for the first time. 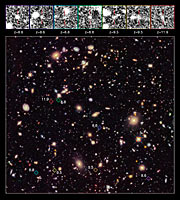 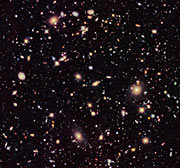