A galaxy with two hearts

This new Hubble image shows the spiral galaxy Messier 83, otherwise known as the Southern Pinwheel Galaxy. One of the largest and closest barred spirals to us, this galaxy is dramatic and mysterious; it has hosted a large number of supernova explosions, and is thought to have a double nucleus lurking at its core.

Messier 83 is not one to blend into the background. Located some 15 million light-years away in the constellation of Hydra (The Sea Serpent), it is one of the most conspicuous galaxies of its type in our skies. It is a prominent member of a group of galaxies known as the Centaurus A/M83 Group, which also counts dusty Centaurus A (heic1110) and irregular NGC 5253 (potw1248a) as members.

Spiral galaxies come in a range of types depending on their appearance and structure — for example, how tightly wound their arms are, and the characteristics of the central bulge. Messier 83 has a "bar" of stars slicing through its centre, leading to its classification as a barred spiral. The Milky Way also belongs to this category.

These bars are thought to act a bit like a funnel, channelling gas inwards towards the galaxy's centre. This gas is then used to form new stars and also to feed the galaxy's central black hole, explaining why many barred spirals — including Messier 83 — have very active and luminous central regions.

However, Messier 83's centre is mysterious and unusual; the supermassive black hole at its heart is not alone. This striking spiral displays a phenomenon known as a double nucleus — a feature that has also been spotted in the Andromeda Galaxy (heic0512), the nearest spiral galaxy to us. This does not mean that Messier 83 contains two central black holes, but that its single supermassive black hole may be ringed by a lopsided disc of stars, which orbits around the black hole and creates the appearance of a dual core [1].

As well as this double nucleus, Messier 83 has hosted quite a few supernova explosions — six in total that we have observed (SN 1923A, SN 1945B, SN 1950B, SN 1957D, SN 1968L, and SN 1983N). This number is matched by only two other galaxies: Messier 61 (potw1324a) which also has six, and NGC 6946 (opo9910e), which tops the list with nine. As well as these explosions, almost 300 supernova remnants — the older leftovers from exploded stars — have been found within Messier 83, detected using the data that make up this image. These observations are being used to study the life cycle of stars. As well as these old remnants, some 3000 star clusters have been identified in Messier 83, some of which are very young at under 5 million years old.

This mosaic image uses observations taken by Hubble's Wide Field Camera 3. It shows the galaxy in full, with dark dust lanes, fiery red patches of gas, and bright blue patches of recent star formation speckled across the spiralling arms. Although it looks sprawling, Messier 83 is just under half of the size of the Milky Way.

This new image is being released today, 9 January 2014, at the 223rd meeting of the American Astronomical Society in Washington, DC, USA.

[1] This central region is a very bizarre place. Neither of the two components making up the double nucleus are actually aligned with the galaxies kinematic centre — the region inferred to be the central part of Messier 83 from the motions of the stars within the galaxy. The "second nucleus" is not seen directly, but is detected by studying how mass within the galaxy is distributed. 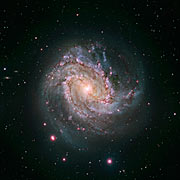 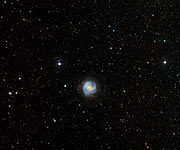