The riddle of the missing stars

Thanks to the NASA/ESA Hubble Space Telescope, some of the most mysterious cosmic residents have just become even more puzzling. New observations of globular clusters in a small galaxy show they are very similar to those found in the Milky Way, and so must have formed in a similar way. One of the leading theories on how these clusters form predicts that globular clusters should only be found nestled in among large quantities of old stars. But these old stars, though rife in the Milky Way, are not present in this small galaxy, and so, the mystery deepens.

Globular clusters — large balls of stars that orbit the centres of galaxies, but can lie very far from them — remain one of the biggest cosmic mysteries. They were once thought to consist of a single population of stars that all formed together. However, research has since shown that many of the Milky Way's globular clusters had far more complex formation histories and are made up of at least two distinct populations of stars.

Of these populations, around half the stars are a single generation of normal stars that were thought to form first, and the other half form a second generation of stars, which are polluted with different chemical elements. In particular, the polluted stars contain up to 50-100 times more nitrogen than the first generation of stars.

The proportion of polluted stars found in the Milky Way's globular clusters is much higher than astronomers expected, suggesting that a large chunk of the first generation star population is missing. A leading explanation for this is that the clusters once contained many more stars but a large fraction of the first generation stars were ejected from the cluster at some time in its past.

This explanation makes sense for globular clusters in the Milky Way, where the ejected stars could easily hide among the many similar, old stars in the vast halo, but the new observations, which look at this type of cluster in a much smaller galaxy, call this theory into question.

"We knew that the Milky Way's clusters were more complex than was originally thought, and there are theories to explain why. But to really test our theories about how these clusters form we needed to know what happened in other environments," says Søren Larsen of Radboud University in Nijmegen, the Netherlands, lead author of the new paper. "Before now we didn’t know whether globular clusters in smaller galaxies had multiple generations or not, but our observations show clearly that they do!"

The astronomers' detailed observations of the four Fornax clusters show that they also contain a second polluted population of stars [2] and indicate that not only did they form in a similar way to one another, their formation process is also similar to clusters in the Milky Way. Specifically, the astronomers used the Hubble observations to measure the amount of nitrogen in the cluster stars, and found that about half of the stars in each cluster are polluted at the same level that is seen in Milky Way's globular clusters.

This high proportion of polluted second generation stars means that the Fornax globular clusters' formation should be covered by the same theory as those in the Milky Way.

Based on the number of polluted stars in these clusters they would have to have been up to ten times more massive in the past, before kicking out huge numbers of their first generation stars and reducing to their current size. But, unlike the Milky Way, the galaxy that hosts these clusters doesn't have enough old stars to account for the huge number that were supposedly banished from the clusters.

"If these kicked-out stars were there, we would see them — but we don't!" explains Frank Grundahl of Aarhus University in Denmark, co-author on the paper. "Our leading formation theory just can't be right. There's nowhere that Fornax could have hidden these ejected stars, so it appears that the clusters couldn't have been so much larger in the past."

This finding means that a leading theory on how these mixed generation globular clusters formed cannot be correct and astronomers will have to think once more about how these mysterious objects, in the Milky Way and further afield, came to exist.

The new work is detailed in a paper published today, 20 November 2014, in The Astrophysical Journal.

[1] The Milky Way’s gravity keeps Fornax orbiting around us as a satellite galaxy. 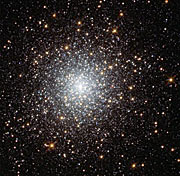 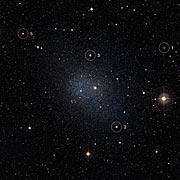 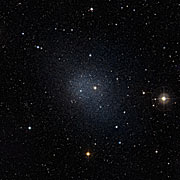 PR Video heic1425a
Hubblecast 80: The riddle of the missing stars