In a new study, scientists have gathered all available NASA/ESA Hubble Space Telescope data on the four outer moons of Pluto to analyse the system in more depth than ever before. The observations show that at least two of Pluto’s moons are not neatly rotating on their axes but are in chaotic rotation while orbiting around Pluto and its companion Charon. The study also hints that one of the moons has a mysterious jet-black colouring. These surprising results appear in the 4 June issue of the journal Nature.

Almost every moon in the Solar System, including our Moon, rotates on its axis at the same speed as it orbits its parent body. It is for this reason that we always see the same side of the Moon facing us on Earth. On Pluto, however, astronomers have now discovered that there are no hidden sides to its moons.

In a surprising new study, it has been found that two of Pluto’s moons, Nix and Hydra, are in a chaotic rotation. This means that an observer on Pluto would not see the same face of the moons from one night to the next. For visitors on the moons themselves, things would get even more confusing, as every day would be a different length to the one that preceded it.

The other two moons studied, Kerberos and Styx, will likely be found to be chaotic too, pending further study.

“Prior to the Hubble observations, nobody appreciated the intricate dynamics of the Pluto system,” explains Mark Showalter of the Search for Extraterrestrial Intelligence (SETI) Institute in California, USA, main author of the study.

The chaotic motion of the moons is caused by the system’s two central bodies, Pluto and Charon [1]. “These two bodies whirl around each other rapidly, causing the gravitational forces that they exert on the small nearby moons to change constantly,” explains Doug Hamilton, co-author of the study. “Being subject to such varying gravitational forces makes the rotation of Pluto’s moons very unpredictable. The chaos in their rotation is further accentuated by the fact that these moons are not neat and round, but are actually shaped like rugby balls!”

The movement of the moons in the Pluto–Charon system offers valuable insights into how planets orbiting a double star might behave. “We are learning that chaos may be a common trait of binary systems,” Hamilton continues. “It might even have consequences for life on planets orbiting binary stars.”

Clues to the Pluto system chaos first came when astronomers measured variations in the light reflected off of the two small moons. Looking at images taken by Hubble between 2005 and 2012, the brightness was found to change unpredictably — instead of following a regular cycle — in a way that could only be explained by chaotic movement.

These images also showed that the moon Kerberos is charcoal-black in colour, a stark contrast to the bright white of the other moons. It was predicted that pollution from dust blasted off the satellites by meteorite impacts would coat the moons, giving their surfaces a homogenous look, but why Kerberos is black is a mystery.

The chaotic rotation of the moons was not the only surprise that arose from the study; Hubble’s monitoring also revealed a connection between the orbits of the three moons Nix, Styx, and Hydra.

“Their motion is tied together in a way similar to that of three of Jupiter’s large moons,” noted Doug Hamilton of the University of Maryland, co-author of the study. “If you were sitting on Nix, you would see Styx go around Pluto twice every time Hydra goes around three times.”

The chaotic movements found in this fascinating system do not necessarily mean that it is on the brink of flying apart. More studies are needed to determine the long-term fate of the Pluto system.

The researchers agree that a combination of monitoring data from Hubble, a close-up look from NASA’s New Horizons space probe, which flies by the system in July 2015 [2], and, eventually, observations with the NASA/ESA/CSA James Webb Space Telescope will help to settle some of the many mysteries of the Pluto–Charon system.

“Pluto will continue to surprise us when New Horizons flies past it in July,” Showalter said. “Our work with Hubble just gives us a foretaste of what’s in store.”

[1] Due to Charon’s large size, Pluto and Charon orbit about a common centre of gravity that is located in the space between the bodies. Our moon has one eightieth of Earth’s mass, whereas Charon has one eighth of Pluto’s mass.

[2] NASA’s New Horizons space probe was launched in 2006 to study Pluto, its moons, and other Kuiper belt objects. It will fly past the Pluto-Charon system on 14 July 2015 and will produce detailed surface maps of Pluto and all of its moons.

The team of astronomers in this study consists of Mark R. Showalter (SETI Institute, USA) and Doug Hamilton (University of Maryland, USA)

Pluto’s moons are hypothesised to have formed by a collision between the dwarf planet and another similar-sized body early in the history of the solar system. The smashup flung material that coalesced into the family of satellites observed around Pluto today. Pluto’s large binary companion, Charon, was discovered in 1978. The object is almost half the size of Pluto. Hubble discovered Nix and Hydra in 2005, Kerberos in 2011, and Styx in 2012. These little moons, measuring just tens of miles across, were found as part of several Hubble searches for moons and rings to characterize the system in preparation for the New Horizons spacecraft flyby. 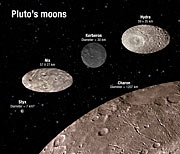