Using the unparalleled sharpness and ultraviolet observational capabilities of the NASA/ESA Hubble Space Telescope, an international team of astronomers has created the most comprehensive high-resolution ultraviolet-light survey of star-forming galaxies in the local Universe. The catalogue contains about 8000 clusters and 39 million hot blue stars.

Ultraviolet light is a major tracer of the youngest and hottest stars. These stars are short-lived and intensely bright. Astronomers have now finished a survey called LEGUS (Legacy ExtraGalactic UV Survey) that captured the details of 50 local galaxies within 60 million light-years of Earth in both visible and ultraviolet light.

The LEGUS team carefully selected its targets from among 500 candidate galaxies compiled from ground-based surveys. They chose the galaxies based on their mass, star-formation rate, and their abundances of elements heavier than hydrogen and helium. Because of the proximity of the selected galaxies, Hubble was able to resolve them into their main components: stars and star clusters. With the LEGUS data, the team created a catalogue with about 8000 young clusters and it also created a star catalogue comprising about 39 million stars that are at least five times more massive than our Sun.

The data, gathered with Hubble’s Wide Field Camera 3 and Advanced Camera for Surveys, provide detailed information on young, massive stars and star clusters, and how their environment affects their development. As such, the catalogue offers an extensive resource for understanding the complexities of star formation and galaxy evolution.

One of the key questions the survey may help astronomers answer is the connection between star formation and the major structures, such as spiral arms, that make up a galaxy. These structured distributions are particularly visible in the youngest stellar populations.

By resolving the fine details of the studied galaxies, while also studying the connection to larger galactic structures, the team aims to identify the physical mechanisms behind the observed distribution of stellar populations within galaxies.

Figuring out the final link between gas and star formation is key to fully understanding galaxy evolution. Astronomers are studying this link by looking at the effects of the environment on star clusters, and how their survival is linked to their surroundings.

LEGUS will not only allow astronomers to understand the local Universe. It will also help interpret views of distant galaxies, where the ultraviolet light from young stars is stretched to infrared wavelengths due to the expansion of space. The NASA/ESA/CSA James Webb Space Telescope and its ability to observe in the far infrared will complement the LEGUS views. 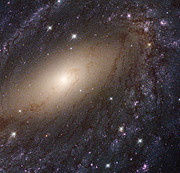 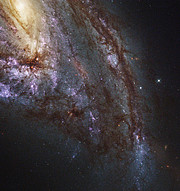 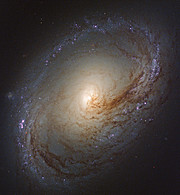 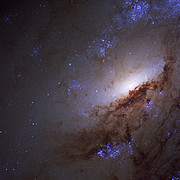