Cosmic collision lights up the darkness

Though it resembles a peaceful rose swirling in the darkness of the cosmos, NGC 3256 is actually the site of a violent clash. This distorted galaxy is the relic of a collision between two spiral galaxies, estimated to have occurred 500 million years ago. Today it is still reeling in the aftermath of this event.

Located about 100 million light-years away in the constellation of Vela (The Sails), NGC 3256 is approximately the same size as our Milky Way and belongs to the Hydra-Centaurus Supercluster. It still bears the marks of its tumultuous past in the extended luminous tails that sprawl out around the galaxy, thought to have formed 500 million years ago during the initial encounter between the two galaxies, which today form NGC 3256. These tails are studded with young blue stars, which were born in the frantic but fertile collision of gas and dust.

When two galaxies merge, individual stars rarely collide because they are separated by such enormous distances, but the gas and dust of the galaxies do interact — with spectacular results. The brightness blooming in the centre of NGC 3256 gives away its status as a powerful starburst galaxy, host to vast amounts of infant stars born into groups and clusters. These stars shine most brightly in the far infrared, making NGC 3256 exceedingly luminous in this wavelength domain. Because of this radiation, it is classified as a Luminous Infrared Galaxy.

NGC 3256 has been the subject of much study due to its luminosity, its proximity, and its orientation: astronomers observe its face-on orientation, that shows the disc in all its splendour. NGC 3256 provides an ideal target to investigate starbursts that have been triggered by galaxy mergers. It holds particular promise to further our understanding of the properties of young star clusters in tidal tails.

As well as being lit up by over 1000 bright star clusters, the central region of NGC 3256 is also home to crisscrossing threads of dark dust and a large disc of molecular gas spinning around two distinct nuclei — the relics of the two original galaxies. One nucleus is largely obscured, only unveiled in infrared, radio and X-ray wavelengths.

These two initial galaxies were gas-rich and had similar masses, as they seem to be exerting roughly equal influence on each other. Their spiral disks are no longer distinct, and in a few hundred million years time, their nuclei will also merge and the two galaxies will likely become united as a large elliptical galaxy.

NGC 3256 was previously imaged through fewer filters by the NASA/ESA Hubble Space Telescope as part of a large collection of 59 images of merging galaxies, released for Hubble’s 18th anniversary on 24th April 2008. 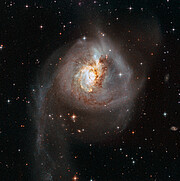 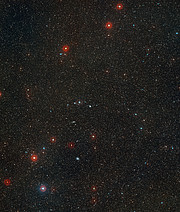