Just as people of the same age can vary greatly in appearance and shape, so do collections of stars or stellar aggregates. New observations from the NASA/ESA Hubble Space Telescope suggest that chronological age alone does not tell the complete story when it comes to the evolution of star clusters.

Previous research on the formation and evolution of star clusters has suggested that these systems tend to be compact and dense when they form, before expanding with time to become clusters of both small and large sizes. New Hubble observations in the Large Magellanic Cloud (LMC) galaxy have increased our understanding of how the size of star clusters in the LMC changes with time[1].

Star clusters are aggregates of many (up to one million) stars. They are active systems in which the mutual gravitational interactions among the stars change their structure over time (known to astronomers as "dynamical evolution"). Because of such interactions, heavy stars tend to progressively sink towards the central region of a star cluster, while low-mass stars can escape from the system. This causes a progressive contraction of the cluster core over different timescales and means that star clusters with the same chronological age can vary greatly in appearance and shape because of their different “dynamical ages”.

Located nearly 160 000 light-years from Earth, the LMC is a satellite galaxy of the Milky Way which hosts star clusters covering a wide range of ages. This differs from our own Milky Way galaxy which primarily contains older star clusters. The distribution of sizes as a function of age observed for star clusters in the LMC is very puzzling, as the young clusters are all compact, while the oldest systems have both small and large sizes.

All star clusters, including those in the LMC, have been found to host a special type of re-invigorated stars called blue stragglers [2]. Under certain circumstances, stars receive extra fuel that bulks them up and substantially brightens them. This can happen if one star pulls matter off a neighbour, or if they collide.

As a result of dynamical aging, heavier stars sink towards the centre of a cluster as the cluster ages, in a process similar to sedimentation, called “central segregation”.  Blue stragglers are bright, making them relatively easy to observe, and they have high masses, which means that they are affected by central segregation and can be used to estimate the dynamical age of a star cluster [3].

Francesco Ferraro of the University of Bologna in Italy and his team used the Hubble Space Telescope to observe blue stragglers in five (coeval) old  LMC star clusters with different sizes and succeeded in ranking them in terms of their dynamical age.

“We demonstrated that different structures of star clusters are due to different levels of dynamical ageing: they are in different physical shape despite the fact that they were born at the same cosmic time. This is the first time that the effect of dynamical ageing has been measured in the LMC clusters” says Ferraro.

“These findings present intriguing areas for further research, since they reveal a novel and valuable way of reading the observed patterns of LMC star clusters, providing new hints about the cluster formation history in the LMC galaxy,” adds co-author Barbara Lanzoni.

[1] The observations were achieved from a set of long exposures acquired with the NASA/ESA Hubble Space Telescope’s Wide Field Camera 3 (WFC3) and Advanced Camera for Surveys (ACS) for five old star clusters in the Large Magellanic Cloud galaxy, secured under proposal 14164 (PI: Sarajedini).

[2] Blue stragglers are so called because of their blue colour, and the fact that their evolution lags behind that of their neighbours.

[3] Blue stragglers combine being relatively bright and having high mass by the standards of globular cluster stars, but they are not the only stars within these clusters that are either bright or massive.

The team’s paper will appear in Nature Astronomy. 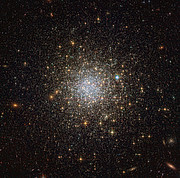