Scientists were expecting to find an intermediate-mass black hole at the heart of the globular cluster NGC 6397, but instead they found evidence of a concentration of smaller black holes lurking there. New data from the NASA/ESA Hubble Space Telescope have led to the first measurement of the extent of a collection of black holes in a core-collapsed globular cluster.

Globular clusters are extremely dense stellar systems, in which stars are  packed closely together. They are also typically very old — the globular cluster that is the focus of this study, NGC 6397, is almost as old as the Universe itself. It resides 7800 light-years away, making it one of the closest globular clusters to Earth. Because of its very dense nucleus, it is known as a core-collapsed cluster.

When Eduardo Vitral and Gary A. Mamon of the Institut d’Astrophysique de Paris set out to study the core of NGC 6397, they expected to find evidence for an “intermediate-mass” black hole (IMBH). These are smaller than the supermassive black holes that lie at the cores of large galaxies, but larger than stellar-mass black holes formed by the collapse of massive stars. IMBH  are the long-sought “missing link” in black hole evolution and their mere existence is hotly debated, although a few candidates have been found (see [1], for example).

“Our analysis indicated that the orbits of the stars are close to random throughout the globular cluster, rather than systematically circular or very elongated,” explained Mamon.

“We found very strong evidence for invisible mass in the dense central regions of the cluster, but we were surprised to find that this extra mass is not point-like but extended to a few percent of the size of the cluster,” added Vitral.

This invisible component could only be made up of the remnants (white dwarfs, neutron stars, and black holes) of massive stars whose inner regions collapsed under their own gravity once their nuclear fuel was exhausted. The stars progressively sank to the cluster’s centre after gravitational interactions with nearby less massive stars, leading to the small extent of the invisible mass concentration. Using the theory of stellar evolution, the scientists concluded that the bulk of the unseen concentration is made of stellar-mass black holes, rather than white dwarfs or neutron stars that are too faint to observe.

Two recent studies had also proposed that stellar remnants and in particular, stellar-mass black holes, could populate the inner regions of globular clusters.

“Our study is the first finding to provide both the mass and the extent of what appears to be a collection of mostly black holes in a core-collapsed globular cluster,” said Vitral.

The astronomers also note that this discovery raises the question of whether mergers of these tightly packed black holes in core-collapsed globular clusters may be an important source of gravitational waves recently detected by the Laser Interferometer Gravitational-Wave Observatory (LIGO) experiment.

[1] In 2020, new data from the NASA/ESA Hubble Space Telescope provided the strongest evidence to date for a mid-sized black hole. Read the full press release on this result here.

[2] Proper motion describes how fast objects move in the sky.

[3] The Hubble data for this study were provided by A. Bellini, who measured the proper motions for over 1.3 million stars in 22 globular clusters, including NGC 6397.

The team of astronomers in this study consists of E. Vitral and G. A. Mamon. The results have been published today in Astronomy & Astrophysics. 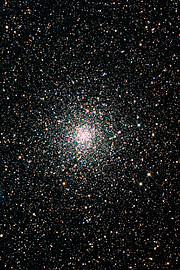