In December 2020 the ESA/Hubble team published a stunning view from the NASA/ESA Hubble Space Telescope of one of the most complete Einstein rings ever discovered. This observation has since been used to develop a lensing model to study the physical properties of the lensed galaxy. Scientists have successfully measured the distance to the object and determined the magnification factor to be 20, which effectively makes Hubble’s observing capability equivalent to that of a 48-metre telescope.

In December 2020 ESA/Hubble published an image in the Picture of the Week series depicting GAL-CLUS-022058s, located in the southern hemisphere constellation of Fornax (The Furnace). The image shows the largest and one of the most complete Einstein rings ever discovered, and was nicknamed the "Molten Ring'' by the Hubble observation’s Principal Investigator, which alludes to its appearance and host constellation.

​​First theorised to exist by Einstein in his general theory of relativity, this object’s unusual shape can be explained by a process called gravitational lensing, which causes light shining from far away to be bent and pulled by the gravity of an object between its source and the observer. In this case, the light from the background galaxy has been distorted into the curve we see by the gravity of the galaxy cluster sitting in front of it. The near exact alignment of the background galaxy with the centre of the galaxy cluster, seen in the middle of this image, has warped and magnified the image of the background galaxy into an almost perfect ring. The gravity from the galaxies in the cluster is soon to cause additional distortions.

A team of European astronomers have now used a multi-wavelength dataset, which includes inputs from the NASA/ESA Hubble Space Telescope and this featured image, to study this Einstein ring in detail. Archival data from the European Southern Observatory's Very Large Telescope (VLT) FORS instrument determined the redshift value of the lensed galaxy.

“In order to derive the physical properties of the lensed galaxy a lensing model is needed. Such a model could only be obtained with the Hubble imaging,” explained the lead investigator Anastasio Díaz-Sánchez of the Universidad Politécnica de Cartagena in Spain. “In particular, Hubble helped us to identify the four counter images and the stellar clumps of the lensed galaxy, for which the Picture of the Week image was used.”

From this lensing model the team calculated the amplification factor, which is a valuable effect of gravitational lensing. This allowed the team to study the intrinsic physical properties of the lensed galaxy. Of particular interest is the determination of the galaxy’s distance, which shows that the galaxy’s light has travelled approximately 9.4 billion light-years [1].

“The detection of molecular gas, of which new stars are born, allowed us to calculate the precise redshift and thus gives us confidence that we are truly looking at a very distant galaxy," said Nikolaus Sulzenauer, PhD student at the Max Plank Institute for Radio Astronomy in Germany and member of the investigation team.

Furthermore, the team determined the galaxy’s magnification factor to be 20, which effectively makes the Hubble Space Telescope’s observing capability equivalent to that of a 48-metre telescope. This is larger than the currently planned extremely large telescopes.

“The lensed galaxy is one of the brightest galaxies in the millimetre wavelength regime,” added Helmut Dannerbauer of the Institute of Astrophysics of the Canary Islands in Spain and a member of the investigation team. “Our research has also shown that it is a normal star-forming galaxy (a so-called main sequence galaxy) at the peak epoch of star formation in the Universe.”

“We can clearly see the spiral arms and the central bulge of the galaxy in the Hubble images. This will help us to better understand star formation in distant galaxies using planned observations," added team member Susana Iglesias-Groth of the Institute of Astrophysics of the Canary Islands in Spain. 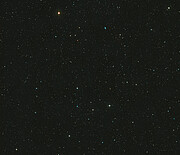