Combining artificial intelligence with many keen human eyes, astronomers have found 1701 new asteroid trails in archival data from the NASA/ESA Hubble Space Telescope, consisting of more than 37 000 images that span two decades. The project reflects both Hubble’s value to scientists as an asteroid hunter and how the public can effectively contribute to citizen science initiatives.

On International Asteroid Day in June 2019 an international group of astronomers launched the Hubble Asteroid Hunter, a citizen science project to identify asteroids in archival Hubble data. The initiative was developed by researchers and engineers at the European Science and Technology Centre (ESTEC) and the European Space Astronomy Centre’s Science Data Centre (ESDC), in collaboration with the Zooniverse platform, the world’s largest and most popular citizen science platform, and Google.

The astronomers collectively identified more than 37 000 composite images taken between April 2002 and March 2021 with Hubble’s ACS and WFC3 instruments. With a typical observation time of 30 minutes, asteroid trails appear as curved lines or streaks in these images. Over 11 400 members of the public classified and analysed these images. More than 1000 trails were identified, providing a training set for an automated algorithm based on artificial intelligence. The combination of citizen science and AI resulted in a final dataset containing 1701 trails in 1316 Hubble images. Project participants also tagged various other astronomical objects, such as gravitational lenses, galaxies and nebulae. Volunteers discussed their findings and sought assistance from scientists and other participants via the project’s forum.

Roughly one third of the asteroid trails seen could be identified and attributed to known asteroids in the International Astronomical Union’s Minor Planet Centre, the largest database of Solar System objects. This left 1031 unidentified trails that are faint and likely to be smaller asteroids than those detected in ground-based surveys. The vast majority of these asteroids are expected to be located in the Main Belt between Mars and Jupiter, where asteroids of such small size are as yet poorly studied. These trails could give the astronomers insightful clues about the conditions in the early Solar System when the planets were forming.

The project highlights Hubble’s potential to image faint, previously unknown asteroids and represents a new approach to finding asteroids in astronomical archives spanning decades, which may be effectively applied to other datasets. In addition to illustrating Hubble’s value as an asteroid hunter, it also reinforced the public’s interest in contributing towards scientific endeavours and the value of citizen science efforts.

Next, the project will explore the 1031 streaks of previously unknown asteroids to characterise their orbits and study their properties, such as their sizes and rotation periods. As most of these asteroid streaks were captured by Hubble many years ago, it is not possible to follow them up now to determine their orbits [1]. However, using Hubble, astronomers can use the parallax effect to determine the distance to the unknown asteroids and put constraints on their orbits. As Hubble moves around the Earth, it changes its point of view while observing the asteroid which also moves on its own orbit. By knowing the position of Hubble during the observation and measuring the curvature of the streaks, scientists can determine the distances to the asteroids and estimate the shapes of their orbits. Some of the longer Hubble observations facilitate the measurement of a light curve [2] for the asteroids, from which the team can measure their rotation periods and infer their shapes.

[1] Compared to the bright stars and Solar System planets which Hubble regularly tracks, most of the asteroids are very faint and move very quickly, making them difficult to spot. As they will have drifted a very long way since first being seen, the likelihood that predictions of their orbits will be exact enough to capture the object in Hubble’s precise field of view is too slim. 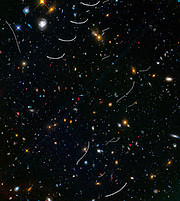 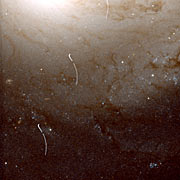