Three different moments in a far-off supernova explosion were captured in a single snapshot by the NASA/ESA Hubble Space Telescope. The progenitor star exploded more than 11 billion years ago, when the Universe was less than a fifth of its current age of 13.8 billion years.

This is the first detailed look at a supernova at such an early time in the Universe’s evolution. The data could help scientists learn more about the formation of stars and galaxies in the early Universe.

This observation was possible thanks to the phenomenon called gravitational lensing, as first predicted by Einstein’s general theory of relativity. In this case, the light took three different paths through the cosmic lens of the massive galaxy cluster Abell 370, bending and magnifying the light from the more distant supernova located behind the cluster. The three paths were of three different lengths, so when the light arrived at Hubble (on the same day in December 2010), the supernova appeared at three different stages of evolution.

The Hubble exposure also captured the fading supernova’s rapid change of colour, which indicates its changing temperature. The bluer the colour, the hotter the supernova is. The earliest phase captured appears blue. As the supernova cooled its light turned redder.

This is also the first time astronomers have been able to measure the size of a dying star in the early Universe. They did this by observing the supernova’s brightness and rate of cooling, both of which depend on the size of the progenitor star. Hubble’s observations show that the red supergiant whose supernova explosion the researchers discovered had a radius about 500 times larger than the Sun.

An international team of astronomers found this supernova by sifting through the Hubble data archives, looking for transient events. The team also has time planned for the NASA/ESA/CSA James Webb Space Telescope to observe even more distant supernovae. They hope to contribute to a catalogue of very far-off supernovae to help astronomers understand if the stars that existed many billions of years ago are different from those in the nearby Universe. The team’s paper, entitled “Shock cooling of a red-supergiant supernova at redshift 3 in lensed images,” will be published in Nature on 10 November.

This image was taken as part of the Hubble observation programme GO-11591 (PI J.-P. Kneib).

The associated science results were also supported by the Hubble Cycle 27 Archival Research programme, as well as by Hubble observation programmes GO-15936 and GO-16278. 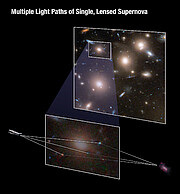