After months of delays because of wiring defects, an engine swap and replacement of a crushed liquid hydrogen line, NASA launched Discovery into space on Hubble Servicing Mission 3A Monday 20 December at 01:50 CET. The main objectives for the mission were to replace Hubble's faulty gyroscopes, and other equipment, such as the computer, a Fine Guidance Sensor, a radio transmitter and a Solid State Recorder.

Hubble's gyroscopes have been cause of some concern in the past years. Four of them have failed one after the other since the Second Servicing Mission in 1997. In fact, the last of the four failing gyroscopes left Hubble in a "safe mode" state without observing capabilities.

Within two days Discovery, with its crew of seven astronauts, had manoeuvred close enough to Hubble so that ESA astronaut Jean-Frangois Clervoy was able to grapple the telescope with the Shuttle's robotic arm.

The first of three scheduled spacewalks took place from 19:55 on Wednesday 22 December to 04:10 on 23 December. Altogether 8 hours and 15 minutes making it the second longest spacewalk ever. On this spacewalk astronauts Smith and Grunsfeld managed to replace all of the six gyros onboard Hubble. The news of this achievement was naturally received with great pleasure and relief by the entire astronomical community. On this spacewalk six so-called voltage/temperature kits were also replaced. They will prevent Hubble's batteries from overcharging.

The second spacewalk took place from 20:06 on Thursday 23 December to 04:16 on 24 December. Again a record long spacewalk lasting 8 hours and 10 minutes. Hubble's main computer was replaced with a more modern 486 model. The new computer will enable Hubble to calculate 20 times faster, and its RAM has room for six times the amount of data compared to the old computer. The team - NASA's Michael Foale and ESA's Claude Nicollier - also managed to exchange a Fine Guidance Sensor, which is being used to point Hubble at the objects being observed. These sensors can also be used to make a special type of observations known as astrometry - or 'position-measurements'. The only tension during this spacewalk occurred when Nicollier and Foale worked intensively some minutes on sliding the sensor on place.

On the third spacewalk from 20:17 on Friday 24 December to 04:25 on 25 December (8 hours 8 minutes) a faulty radio transmitter and a data tape recorder were exchanged. Also thermal insulation blankets on the outside of Hubble were replaced although not all of the planned work with this was carried out. There is anyway no doubt that the achievements of the three spacewalks during this third Servicing Mission will enter into the history books.

Hubble was released after preliminary tests had showed that all systems - new as well as old - were performing perfectly. Precisely at 00:03 CET on Sunday 26 December Clervoy let go of the telescope with the robotic arm. Discovery then backed slowly away from Hubble, and the astronauts used the remaining time in space to stow equipment away as well as making other preparations for the landing.

At 01:01 on 28 December Discovery touched down on the runway at Kennedy Space Center. During the mission Discovery circled the Earth 119 times and travelled more than 5 million kilometres.

The immense success of this mission has ensured that Hubble is now well prepared for the next many years of observing.

It is expected that scientific operations will be taken up approximately two weeks after Hubble's release. First there is a so-called Servicing Mission Orbital Verification (SMOV) period. SMOV will be used to test and calibrate all instruments and to prepare them for a new period of observations. SMOV will take several weeks, although the scientific observations will start two weeks into this period. The first observations to be released are called Early Release Observations (EROs). The EROs will be used to show the status of instruments and telescope after the servicing work. 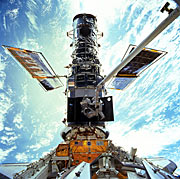 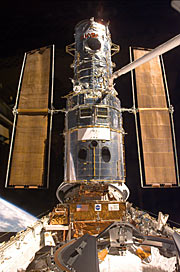