An exoplanet is a planet that is located outside our Solar System.

While there is currently no formal agreement on what exactly defines an exoplanet, the word is used to indicate planet-sized bodies that are located beyond our Solar System. By convention, exoplanets have sufficient mass to maintain a roughly spherical shape, but not so much mass that nuclear fusion is triggered in them (as is the case for stars). They might orbit one star, a pair of stars, or multiple stars — or not orbit a star at all. The categorisation of exoplanets is also not formalised, but certain categories are typically used, including Hot Jupiters, Super Earths and Mini Neptunes. The discovery of the first exoplanet was only confirmed in 1992, when two exoplants were discovered orbiting a pulsar.

While not one of its original science goals, Hubble has made a name for itself as an exoplanet explorer — in particular by studying the atmospheres of exoplanets. The chemical makeup of a planet’s atmosphere leaves a unique fingerprint on the starlight that passes through it, which Hubble can study.

In 2001, astronomers using Hubble announced the first direct detection of the atmosphere of a planet orbiting a star outside our Solar System. The planet orbits a yellow, Sun-like star called HD 209458, located 150 light-years away. The planet was not seen directly by Hubble. Rather, the presence of sodium as well as evaporating hydrogen, oxygen and carbon was detected in light filtered through the planet's atmosphere when it passed in front of its star as seen from Earth. These observations demonstrated that it is possible with Hubble and other telescopes to measure the chemical makeup of alien planet atmospheres and to search for the chemical markers of life beyond Earth.

In 2008 Hubble detected the first organic molecule on an exoplanet. This breakthrough was an important step towards one day identifying signs of life on a planet outside our Solar System. Hubble found the tell-tale signature of the molecule methane in the atmosphere of the Jupiter-sized exoplanet HD 189733b. Although methane has been detected on most of the planets in our Solar System, this was the first time any organic molecule was detected on a world orbiting another star.

In 2019, in an exciting discovery, Hubble data were used to detect water vapour in the atmosphere of a super-Earth within the habitable zone of its host star. K2-18b, which is eight times the mass of Earth, is now the only planet orbiting a star outside the Solar System, or exoplanet, known to have both water and temperatures that could support life.

You can learn more about how Hubble studies exoplanets in this video. 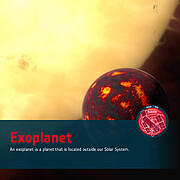