Infrared astronomy refers to an area of astronomy where astronomers observe and analyse light from the Universe that falls within the infared wavelength range.

Astronomers analyse light (electromagnetic radiation) in order to study the Universe. Telescopes collect light, and the data collected by telescopes allows astronomers to learn about specific celestial objects, and to develop better theories about the past, present and future of the Universe. The nature of the light that an object emits depends on its temperature. Whereas hot stars predominantly emit visible light, infrared radiation is emitted by slightly cooler objects, such as exoplanets and cool clouds of cosmic dust. Furthermore, infrared radiation passes more freely through cosmic dust than visible light (which is scattered by cosmic dust) does, meaning that infrared astronomy allows astronomers to observe regions of space that are otherwise obscured by cosmic dust. This means that images taken in the infrared also typically reveal more stars than images taken in visible light (since stars emit infrared as well as visible light). By combining observations at different wavelengths, we can develop a more complete picture of the structure, composition and behaviour of celestial objects than the visible wavelengths alone could ever show.

Hubble’s high resolving power has been crucial in the investigation of regions of star formation, both in the Milky Way and in other galaxies, and its infrared capabilities have allowed it to peer through the thick clouds of dust and gas present in those regions. To celebrate its 23rd anniversary, Hubble released a stunning new image of one of the most distinctive objects in our skies, the Horsehead Nebula. By capturing the object in infrared radiation, the image quite literally shows the nebula in a whole new light, capturing plumes of gas and revealing a beautiful, delicate structure that is normally obscured by dust.

We also invite you to watch this Hubblecast that explores how Hubble’s observations differ across different wavelengths of the electromagnetic spectrum, and how these observations will be complemented by those of the James Webb Space Telescope. 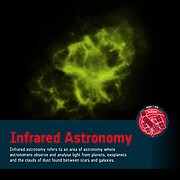 Infrared Astronomy
Infrared astronomy refers to an area of astronomy where astronomers observe and analyse light from planets, exoplanets and the clouds of dust found between stars and galaxies.