This blue ball is Neptune, the eighth and outermost planet of our Solar System [1]. The NASA/ESA Hubble Space Telescope made this picture on 25-26 June 2011 to celebrate the first anniversary of Neptune’s discovery... in Neptune years. Neptune’s leisurely journey around the Sun takes 60 190 Earth days — just under 165 Earth years. This means that 11 July 2011 marked the first time that Neptune has completed a full orbit since its discovery on the night of 23-24 September 1846.

Neptune is too distant and too faint to be seen with the naked eye, and so its discovery had to wait for the invention of telescopes.

While Galileo Galilei did chance upon it, when it was coincidentally close to the planet Jupiter early in 1613, his notebooks show he misidentified it as a star. After this near miss, Neptune’s true identity would remain hidden for another two centuries.

In the summer of 1846, the French astronomer Urbain Le Verrier studied the irregularities in Uranus’ orbit, and concluded that there must be an unidentified eighth planet disrupting its orbit. Not only that, he predicted precisely where in the sky it could be found. Independently, John Couch Adams in England was making similar calculations and coming to a similar conclusion. But within 24 hours of Le Verrier alerting the Berlin Observatory of his calculations, in the early hours of 24 September 1846, astronomers spotted the planet, to the horror of rival astronomers searching for the planet in the United Kingdom.

To astronomers peering through telescopes in the mid 19th century,  Neptune would have appeared as a tiny blue disc, virtually indistinguishable from a star. Even though it is much bigger than Earth — almost four times the diameter — it is also very distant, around 30 times further away from the Sun than we are. This makes it technically challenging to resolve the planet’s disc.

With a telescope as powerful as Hubble, the planet still appears fairly small, though detail starts to emerge. The turbulent conditions in the planet’s atmosphere are its most distinctive feature, alongside the blue colour caused by traces of methane gas. Neptune is a giant planet. Its composition is intermediate between the gas giants Jupiter and Saturn, and the smaller rocky planets like Earth and Venus. Its thick atmosphere, largely made up of hydrogen and helium, is thought to host the Solar System’s most furious storms, with winds of up to 2000 km/h.

Neptune was visited by the Voyager 2 probe in 1989. The probe sent back highly detailed pictures of the planet and its moons before setting off on its long journey into deep space.

[1] Pluto, which for most of the 20th century was considered to be the Solar System’s ninth planet, is now classified as a dwarf planet. 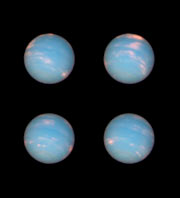 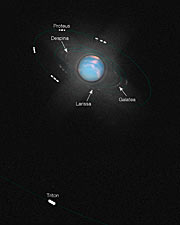