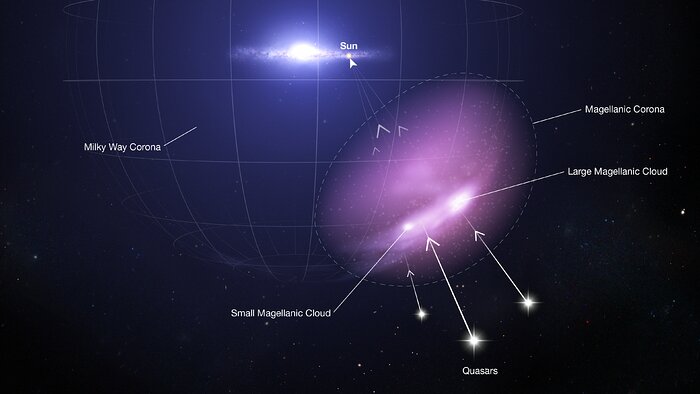 Researchers have used spectroscopic observations of ultraviolet light from quasars to detect and map out the Magellanic Corona, a diffuse halo of hot, supercharged gas surrounding the Small and Large Magellanic Clouds. Shown here in purple, the corona stretches more than 100,000 light-years from the main mass of stars, gas, and dust that make up the Magellanic Clouds, intermingling with the hotter and more extensive corona that surrounds the Milky Way.

The Magellanic Clouds, dwarf galaxies roughly 160,000 light-years from Earth, are the largest of the Milky Way’s satellites and are thought to be on their first in-falling passage around the Milky Way. This journey has begun to unravel what were once barred spirals with multiple arms into more irregular-shaped galaxies with long tails of debris. The corona is thought to act as a buffer protecting the dwarf galaxies’ vital star-forming gas from the gravitational pull of the much larger Milky Way.

The detection of the Magellanic Corona was made by analysing patterns in ultraviolet light from 28 distant background quasars. As the quasar light passes through the corona, certain wavelengths (colours) of ultraviolet light are absorbed. The quasar spectra become imprinted with the distinct signatures of carbon, oxygen, and silicon ions that make up the corona gas. Because each quasar probes a different part of the corona, the research team was also able to show that the amount of gas decreases with distance from the centre of the Large Magellanic Cloud.

This study used archival observations of quasars from Hubble’s Cosmic Origins Spectrograph (COS) and the Far Ultraviolet Spectroscopic Explorer (FUSE). Quasars have also been used to probe the Magellanic Stream, outflows from the Milky Way , and the halo surrounding the Andromeda Galaxy.