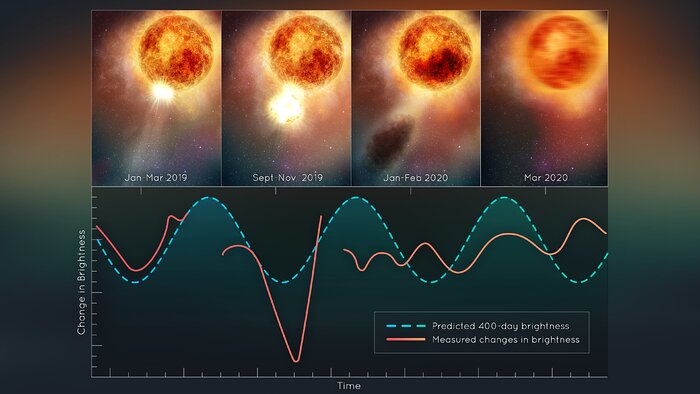 This illustration plots changes in the brightness of the red supergiant star Betelgeuse, following the titanic mass ejection of a large piece of its visible surface. The escaping material cooled to form a cloud of dust that temporarily made the star look dimmer, as seen from Earth. This unprecedented stellar convulsion disrupted the monster star’s 400-day-long oscillation period that astronomers had measured for more than 200 years. The interior may now be jiggling like a plate of gelatin dessert.

The star Betelgeuse appears as a brilliant, ruby-red, twinkling spot of light in the upper right shoulder of the winter constellation Orion the Hunter. This ageing star is classified as a supergiant because it has swelled up to an astonishing diameter of approximately 1 billion miles. If placed at the centre of our Solar System it would reach out to the orbit of Jupiter.

The star's ultimate fate is to explode as a supernova. When that eventually happens it will be briefly visible in the daytime sky from Earth. But there are a lot of fireworks going on now before the final detonation. Astronomers using Hubble and other telescopes have deduced that the star blew off a huge piece of its visible surface in 2019. This has never before been seen on a star. Our Sun routinely goes through mass ejections of its outer atmosphere, the corona. But those events are orders of magnitude weaker than what was seen on Betelgeuse.

The first clue came when the star mysteriously darkened in late 2019. An immense cloud of obscuring dust formed from the ejected surface as it cooled. Astronomers have now pieced together a scenario for the upheaval. And the star is still slowly recovering; the photosphere is rebuilding itself. And the interior is reverberating like a bell that has been hit with a sledgehammer, disrupting the star’s normal cycle. This doesn't mean the monster star is going to explode any time soon, but the late-life convulsions may continue to amaze astronomers.