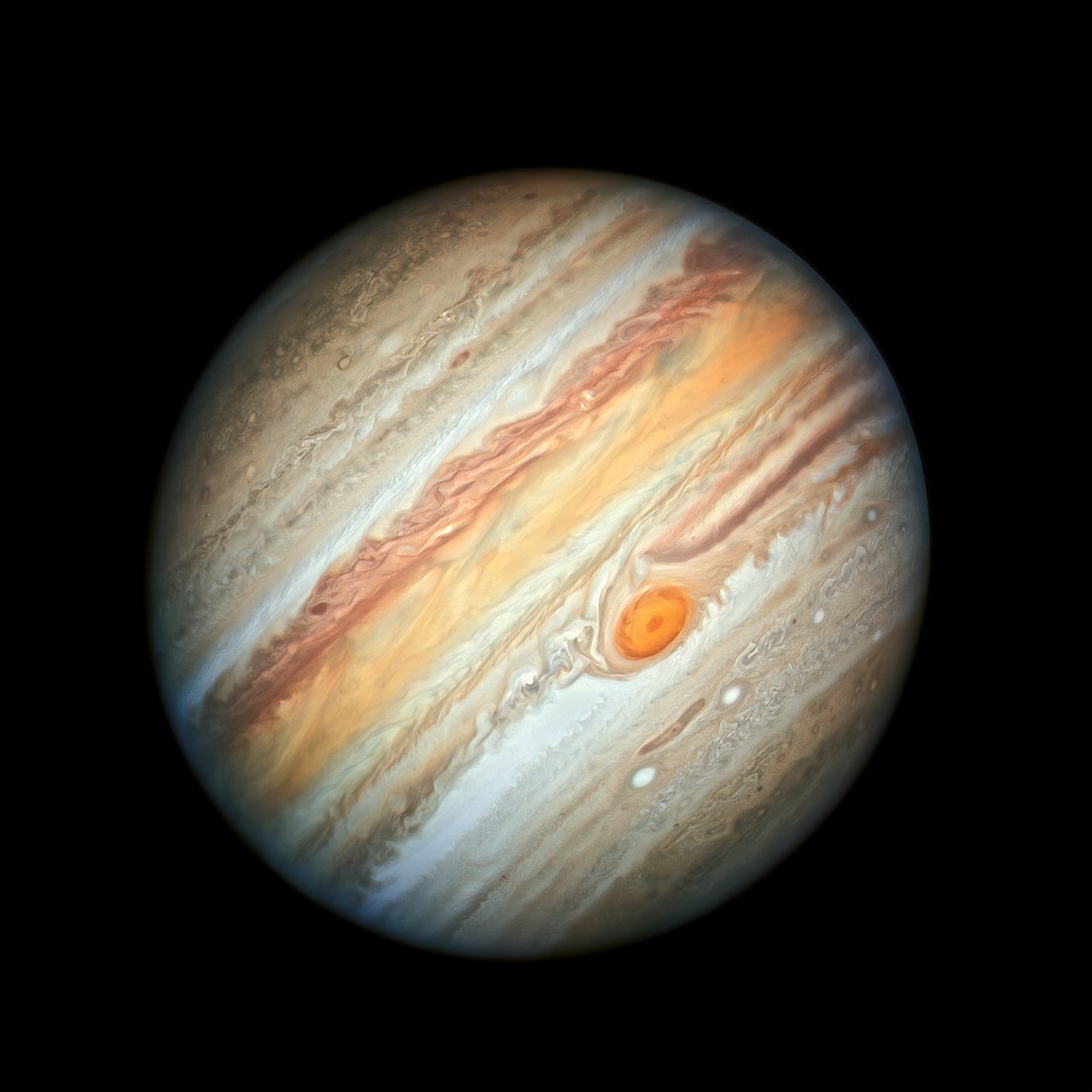 Jupiter is the fifth planet from the Sun. It is a gas giant, and the largest and most massive planet in our Solar System. It is famous for its ‘stripy’ appearance and for the Great Red Spot.

Jupiter lies between Mars and Saturn, making it the fifth planet in orbit around the Sun. It is by far the most massive planet in the Solar System, with a mass over 317 times that of Earth. Jupiter is a gas giant, meaning that it is composed mostly of hydrogen and helium, much of which is in the gaseous state. Jupiter probably does have a rocky core, but the vast majority of its radius is taken up by layers of metallic hydrogen, liquid hydrogen, and its atmosphere. If Jupiter had the same average density as Earth, then it would only have a radius about seven times greater than Earth’s. In reality, Jupiter’s radius is over eleven times greater than that of Earth, thanks to its inflated gaseous atmosphere. Jupiter has a very recognisable appearance, its surface atmosphere visibly split into turbulent strips, and the Great Red Spot, resembling a red eye, below its equator. The Great Red Spot is actually the largest and longest lasting storm in the Solar System. It is larger than planet Earth, and is believed to have been observed in 1665; if so, it has been raging for over 350 years. Jupiter is currently thought to have 79 moons, the largest of which, Ganymede, is bigger than the planet Mercury.

Hubble has seen unprecedented detail in Jupiter’s aurorae. These aurorae are similar to those seen above Earth's polar regions, but are almost 1000 times more energetic and much more complex. Aurorae can be seen at both of Jupiter’s poles — but only in ultraviolet light, so they could have not been observed with any ground-based telescope. Hubble has also charted the dynamic activity on Jupiter and its moon Io.

In contrast to probes that have to travel vast distances and require years of planning to visit the planets, Hubble is able to turn its attention quickly to sudden dramatic events occurring in the Solar System. This allowed it to witness the stunning plunge of comet Shoemaker-Levy 9 into Jupiter’s atmosphere in July 1994. Hubble followed the comet fragments on their last journey and delivered high-resolution images of the impact scars, from which important new information on conditions in the Jovian atmosphere was obtained. The consequences of the impact could be seen for several days afterwards and by studying the Hubble data astronomers were able to gain fundamental information about the composition and density of the giant planet’s atmosphere.

Hubble’s observations have also tracked dynamic weather activity on Jupiter. Hubble’s stunning 2020 snapshot of the planet revealed a remarkable new storm brewing, and a cousin of the Great Red Spot changing colour. The planet is also observed in multiple wavelengths to provide researchers with insights into the altitude and distribution of the planet’s haze and particles to complement visible-light imagery that shows the ever-changing cloud patterns. Hubble observations also reveal that Jupiter’s trademark Great Red Spot is shrinking.

Hubble’s collection of Jupiter images can be explored here. 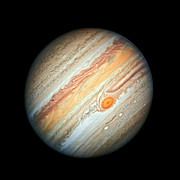 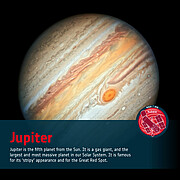 Jupiter
Jupiter is the fifth planet from the Sun. It is a gas giant, and the largest and most massive planet in our Solar System. It is famous for its ‘stripy’ appearance and for the Great Red Spot.