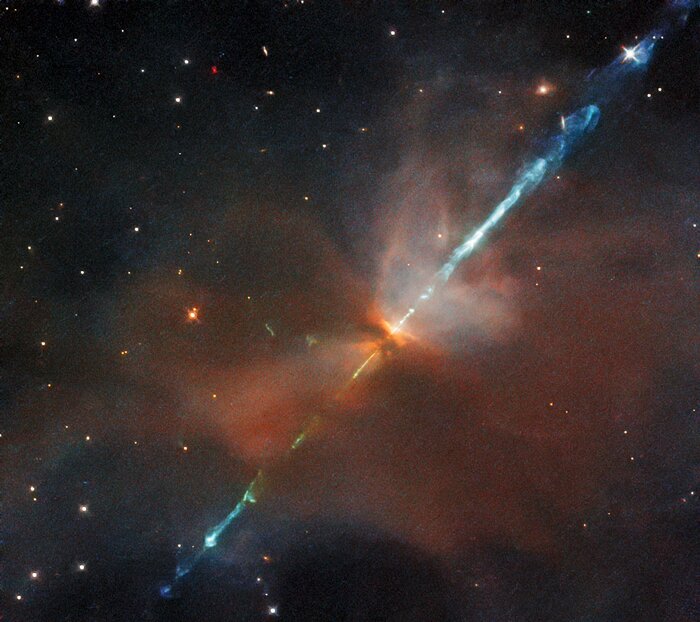 This striking image features a relatively rare celestial phenomenon known as a Herbig–Haro object. This particular Herbig–Haro object is named HH111, and was imaged by Hubble’s Wide Field Camera 3 (WFC3). These spectacular objects are formed under very specific circumstances. Newly formed stars are often very active, and in some cases they expel very narrow jets of rapidly moving ionised gas — gas that is so hot that its molecules and atoms have lost their electrons, making the gas highly charged. The streams of ionised gas then collide with the clouds of gas and dust surrounding newly-formed stars at speeds of hundreds of kilometres per second. It is these energetic collisions that create Herbig–Haro objects such as HH111.

WFC3 takes images at optical and infrared wavelengths, which means that it observes objects at a wavelength range similar to the range that human eyes are sensitive to (optical) and a range of wavelengths that are slightly too long to be detected by human eyes (infrared). Herbig–Haro objects actually release a lot of light at optical wavelengths, but they are difficult to observe because their surrounding dust and gas absorb much of the visible light. Therefore, the WFC3’s ability to observe at infrared wavelengths — where observations are not as affected by gas and dust— is crucial to observing Herbo–Haro objects successfully.