Optical astronomy refers to an area of astronomy where astronomers observe and analyse light from the Universe that falls within the wavelength range that the human eye is sensitive to, also referred to as visible light.

Astronomers analyse light (electromagnetic radiation) in order to study the Universe. Telescopes collect light, and the data collected by telescopes allow astronomers to learn about specific celestial objects, and to develop better theories about the past, present and future of such celestial objects, and of the Universe in general. Human eyes also collect light, but they collect far less light than telescopes can, and they are also only sensitive to light at specific wavelengths. Light that human eyes can detect is referred to as visible light. Optical astronomy, so called because it uses familiar ‘optical’ elements such as lenses and mirrors, and sometimes referred to as visible-light astronomy, is astronomy that is concerned with measuring visible light. This corresponds to electromagnetic waves with wavelengths of 380 to 750 nanometres. The shorter wavelengths correspond to blue light, and the longer to red light, with the full spectrum of visible colours in between. Most celestial objects emit some visible light.

You can compare the optical/visible vs. other wavelength views (including near-infrared) from Hubble of different objects by exploring these images of the Pillars of Creation, the Carina Nebula, the Lagoon Nebula, and Jupiter.

We also invite you to watch this Hubblecast that explores how Hubble’s observations differ across different wavelengths of the electromagnetic spectrum, and how these observations will be complemented by those of the James Webb Space Telescope. 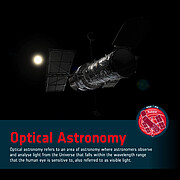 Optical astronomy
Optical astronomy refers to an area of astronomy where astronomers observe and analyse light from the Universe that falls within the wavelength range that the human eye is sensitive to, also referred to as visible light.