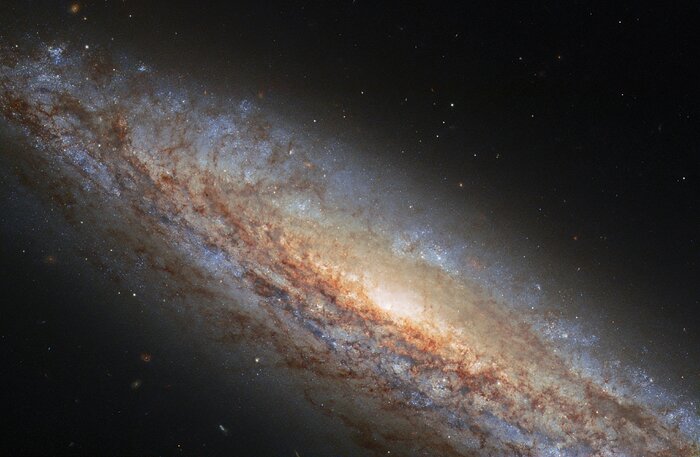 NGC 4666 takes centre stage in this image from the NASA/ESA Hubble Space Telescope. This majestic spiral galaxy lies about 80 million light-years away in the constellation Virgo, and is undergoing a particularly intense episode of star formation. Astronomers refer to galaxies which are forming stars anomalously quickly as starburst galaxies. NGC 4666’s starburst is thought to be due to gravitational interactions with its unruly neighbours — including the nearby galaxy NGC 4668 and a dwarf galaxy.

NGC 4666’s burst of star formation is driving an unusual form of extreme galactic weather known as a superwind — a gigantic transfer of gas from the bright central heart of the galaxy out into space. This superwind is the result of driving winds from short-lived massive stars formed during NGC 4666’s starburst as well as spectacularly energetic supernova explosions. Two such supernova explosions have been seen in NGC 4666 within the last decade — one in 2014 and the other in 2019. The star which led to the 2019 supernova was recently determined to be 19 times as massive as our Sun!

At peak, supernovae are often the brightest sources of light in their galaxies, shining so bright that they can be seen clear across the Universe. The 2014 supernova in NGC 4666 is still active in this image, but more than 900 days after it peaked, the supernova has faded from its former glory and looks like just one more star in this busy galaxy.

Though the torrent of superheated gas emanating from NGC 4666 is truly vast in scale — extending for tens of thousands of light-years — it is invisible in this image. The superwind’s extremely high temperature makes it stand out as a luminous plume in x-ray or radio observations, but it doesn’t show up at the visible wavelengths imaged by Hubble’s Wide Field Camera 3.