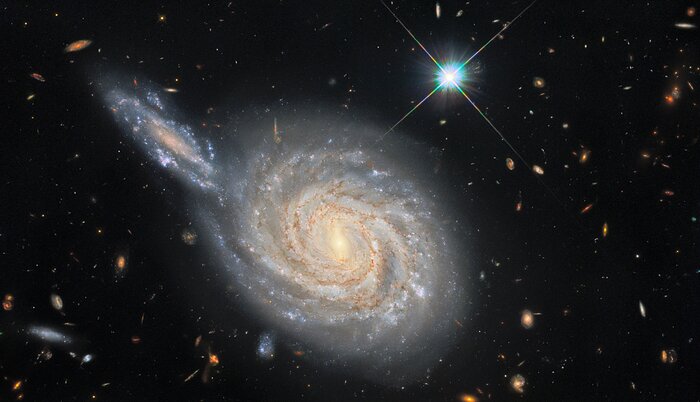 This image from the NASA/ESA Hubble Space Telescope captures the spiral galaxy NGC 105, which lies roughly 215 million light-years away in the constellation Pisces. While it looks like NGC 105 is plunging edge-on into a collision with a neighbouring galaxy, this is just the result of the chance alignment of the two objects in the night sky. NGC 105’s elongated neighbour is actually far more distant and remains relatively unknown to astronomers. These misleading conjunctions occur frequently in astronomy — for example, the stars in constellations are at vastly different distances from Earth, and only appear to form patterns thanks to the chance alignment of their component stars.

The Wide Field Camera 3 observations in this image are from a vast collection of Hubble measurements examining nearby galaxies which contain two fascinating astronomical phenomena — Cepheid variables and cataclysmic supernova explosions. Whilst these two phenomena may appear to be unrelated — one is a peculiar class of pulsating stars and the other is the explosion caused by the catastrophic final throes of a massive star’s life — they are both used by astronomers for a very particular purpose: measuring the vast distances to astronomical objects. Both Cepheids and supernovae have very predictable luminosities, meaning that astronomers can tell precisely how bright they are. By measuring how bright they appear when observed from Earth, these “standard candles” can provide reliable distance measurements. NGC 105 contains both supernovae and Cepheid variables, giving astronomers a valuable opportunity to calibrate the two distance measurement techniques against one another.

Astronomers recently carefully analysed the distances to a sample of galaxies including NGC 105 to measure how fast the Universe is expanding — a value known as the Hubble constant. Their results don’t agree with the predictions of the most widely-accepted cosmological model, and their analysis shows that there is only a 1-in-a-million chance that this discrepancy was caused by measurement errors. This discrepancy between galaxy measurements and cosmological predictions has been a long-standing source of consternation for astronomers, and these recent findings provide persuasive new evidence that something is either wrong or lacking in our standard model of cosmology.