Spanning from 2003 to 2021, this collection of images from the NASA/ESA Hubble Space Telescope features galaxies that are all hosts to both Cepheid variables and supernovae. These two celestial phenomena are both crucial tools used by astronomers to determine astronomical distance, and have been used to refine our measurement of Hubble’s constant, the expansion rate of the Universe

Each of the images in this special collection features a spiral galaxy that hosts both Cepheid variables and a special class of supernovae, two remarkable stellar phenomena that on the face of it do not have much in common: Cepheid variables are pulsating stars that regularly brighten and dim and type Ia supernovae are the catastrophic explosions that mark the death throes of a hot, dense white dwarf star.  However, both can be used by astronomers to measure the distance to an astronomical object.

Establishing the distance of a celestial body is an enormous challenge for astronomers; it can be difficult to distinguish between objects that are dim and relatively close to the Earth and those which are bright and distant. To help overcome this challenge, astronomers have developed what is known as the cosmic distance ladder, a series of distance-determining methods, organised by the relative distances that they can measure. Two important steps in this ladder are Cepheid variables and supernovae: Cepheid variables because the period with which they pulsate can be used to calculate their distance; and supernovae because every type Ia supernova explosion reaches the same known luminosity, meaning that its brightness as viewed from Earth can be used to derive its distance. All the galaxies presented in this collection host Cepheid variables and have had at least one type Ia supernova explosion occur in them within the last 40 years. One of the galaxies, NGC 2525, even contained a supernova that was caught in real time in a remarkable timelapse.

Even before it was launched, one of Hubble’s main science goals was to observe Cepheid variables and supernovae. These observations can help measure the expansion rate of the Universe, a value which astronomers call the Hubble constant. Generations of astronomers have refined this value over almost 30 years using data from more than 1000 hours of Hubble time. Most recently, a team of astronomers called SH0ES [1] used observations of all the supernovae seen by Hubble in the last 40 years  — including those in the galaxies pictured here — to determine the value of the Hubble constant as 73.04 ± 1:04 kms-1 Mpc-1 [2].

“This is what the Hubble Space Telescope was built to do. You are getting the standard measure for the Universe from the gold standard of telescopes,” said Nobel Laureate Adam Riess of Johns Hopkins University in Baltimore, Maryland, who leads the SH0ES Team. “This is Hubble’s magnum opus.”

Interestingly, the expansion rate determined from observational data from telescopes is significantly different from the value predicted by our current standard cosmological model of the Universe. The richness of the Hubble data means that this is vanishingly unlikely to have happened by a chance selection of misleading observations.

The wide collection of Cepheid variable and supernovae-hosting galaxies observed by Hubble were picked out in six different proposals for observing time with the telescope [3]. Whilst these proposals were part of Hubble’s decade-long quest to precisely measure the expansion rate of the Universe, the observations also produced a spate of beautiful galactic portraits, such as those of NGC 5643, NGC 7329, and NGC 3254. Still others have previously been featured in Hubble Pictures of the Week and other releases, including NGC 691, NGC 1559, NGC 2525, NGC 2608 and NGC 3147.

[1] SH0ES stands for “Supernova, H0, for the Equation of State of Dark Energy”

[2] The units of the Hubble constant — kms-1 Mpc-1 — are kilometres per second per megaparsec. If you multiply the distance to an astronomical object in megaparsecs by the Hubble constant you obtain the speed at which that object is receding from Earth as a result of the expansion of the Universe.

[3] The demand for observation time with Hubble is still extremely high, even after more than 30 years since the telescope’s launch, and in order to secure time astronomers need to justify in a written proposal why their work will be helpful and important to the astronomical community. 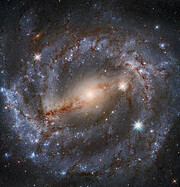 PR Image heic2208c
Spirals Are In This Season 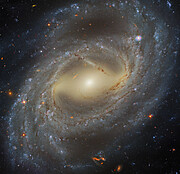 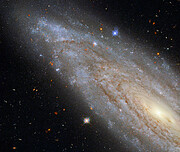