The Phantom Galaxy Across the Spectrum 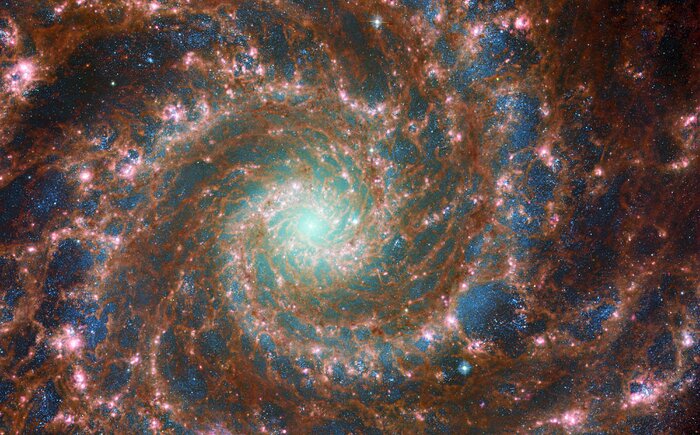 With Hubble’s venerable Advanced Camera for Surveys (ACS) and Webb’s powerful Mid-InfraRed Instrument (MIRI) capturing a range of wavelengths, this new image has remarkable depth. The red colours mark dust threaded through the arms of the galaxy, lighter oranges being areas of hotter dust. The young stars throughout the arms and the nuclear core are picked out in blue. Heavier, older stars towards the galaxy’s centre are shown in cyan and green, projecting a spooky glow from the core of the Phantom Galaxy. Bubbles of star formation are also visible in pink across the arms. Such a variety of galactic features is rare to see in a single image.

Scientists combine data from telescopes operating across the electromagnetic spectrum to truly understand astronomical objects. In this way, data from Hubble and Webb compliment each other to provide a comprehensive view of the spectacular M74 galaxy.