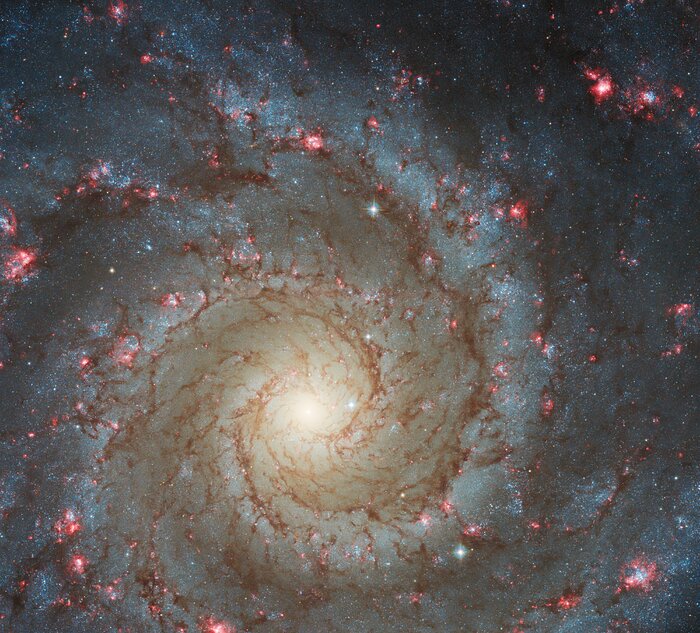 The arms of the spiral galaxy M74 are studded with rosy pink regions of fresh star formation in this image from the NASA/ESA Hubble Space Telescope. M74 — also known as the Phantom Galaxy — lies around 32 million light-years away from Earth in the constellation Pisces, and is a familiar sight for Hubble.
The beautiful reddish blooms that spread throughout M74 are huge clouds of hydrogen gas which are made to glow by the ultraviolet radiation from hot, young stars embedded within them. These regions — which astronomers refer to as H II regions — mark the location of recent star formation and are an important target for both space- and ground-based telescopes. Hubble’s Advanced Camera for Surveys, which collected the data in this image, even has a filter designed to pick out only this specific red wavelength of light!

The data in this image come from a set of observations exploring the evolution of local spiral galaxies such as M74, which aim to gain insights into the history of star formation in these spirals. To do this astronomers examined star clusters to date the different parts of spiral galaxies, enabling them to understand how the galaxies assembled over time. They also explored the distribution of dust in spiral galaxies; this dust is visible in this image as the dark threads winding along the spiral arms of M74.

Aside from their quest to understand the history of spiral galaxies, astronomers also observed M74 to complement observations from other telescopes. Combining observations of the same object from different telescopes across the electromagnetic spectrum gives astronomers far more insight than observations from a single telescope would. Hubble’s observations also paved the way for future instruments; M74 was one of the first targets of the powerful new NASA/ESA/CSA James Webb Space Telescope.