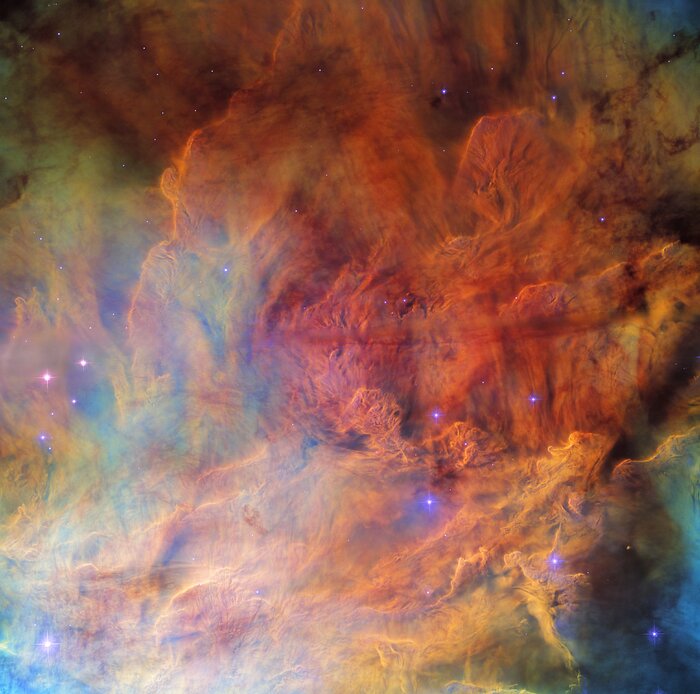 A portion of the open cluster NGC 6530 appears as a roiling wall of smoke studded with stars in this image from the NASA/ESA Hubble Space Telescope. NGC 6530 is a collection of several thousand stars lying around 4350 light-years from Earth in the constellation Sagittarius. The cluster is set within the larger Lagoon Nebula, a gigantic interstellar cloud of gas and dust. It is the nebula that gives this image its distinctly smokey appearance; clouds of interstellar gas and dust stretch from one side of this image to the other.

Astronomers investigated NGC 6530 using Hubble’s Advanced Camera for Surveys and Wide Field Planetary Camera 2. They scoured the region in the hope of finding new examples of proplyds, a particular class of illuminated protoplanetary discs surrounding newborn stars. The vast majority of proplyds have been found in only one region, the nearby Orion Nebula. This makes understanding their origin and lifetimes in other astronomical environments challenging.

Hubble’s ability to observe at infrared wavelengths — particularly with Wide Field Camera 3— have made it an indispensable tool for understanding starbirth and the origin of exoplanetary systems. In particular, Hubble was crucial to investigations of the proplyds around newly born stars in the Orion Nebula. The new NASA/ESA/CSA James Webb Space Telescope’s unprecedented observational capabilities at infrared wavelengths will complement Hubble observations by allowing astronomers to peer through the dusty envelopes around newly born stars and investigate the faintest, earliest stages of starbirth.

[Image description: Clouds of gas cover the entire view, in a variety of bold colours. In the centre the gas is brighter and very textured, resembling dense smoke. Around the edges it is more sparse and faint. Several small, bright blue stars are scattered over the nebula.]