In January 2002, a moderately dim star in the constellation Monoceros, the Unicorn, suddenly became 600 000 times more luminous than our Sun. This made it temporarily the brightest star in our Milky Way. The light from this eruption created a unique phenomenon known as a 'light echo' when it reflected off dust shells around the star.

The brightness of V838 Monocerotis, as astronomers call the star, has long since returned to normal levels. Observations by the NASA/ESA Hubble Space Telescope show remarkable details in the shells of dust lit by the titanic stellar eruption. Astronomers may be able to probe the entire 3D structure of the dust shells surrounding this aging star in much the same way as a doctor does a CAT scan on a patient. The results will appear on 27 March 2003 in Nature.

Astronomers last saw light echoing off dust around stars in our Milky Way in 1936, long before Hubble was able to study this rare sight in the underworld of dusty, black interstellar space.

'As light from the outburst continues to reflect off the dust surrounding the star, we view continuously changing cross-sections of the dust envelope. Hubble's sharp view is allowing us to do 'astronomical tomography' of the dust with unprecedented resolution.' says the lead observer, astronomer Howard Bond of the Space Telescope Science Institute in the United States.

Bond and his team used Hubble images to calculate that the star is about 20 000 light-years from Earth. It gave off enough energy in a brief flash to illuminate surrounding dust. It is similar to taking a flash picture of the walls of an undiscovered cave. The star presumably ejected the illuminated dust shells in previous outbursts. Some of the light from the latest outburst shines onto the dust and is reflected on to Earth. The path is indirect so the light arrives at Earth months later than light shining directly from the star itself.

V838 Monocerotis's outburst was somewhat similar to that of a nova, a more common stellar outburst. A typical nova is a normal star that dumps hydrogen onto a compact, white dwarf companion star. The hydrogen builds up until it spontaneously explodes by nuclear fusion - like a titanic hydrogen bomb. The explosion exposes a searing stellar core with a temperature of hundreds of thousands of degrees Celsius. Oddly enough however, V838 Monocerotis did not expel its outer layers. Instead, it grew enormously in size, with its surface temperature dropping to temperatures not much hotter than a light bulb. Growing so large without losing the outer layers is very unusual and completely unlike an ordinary nova explosion.

'We are having a hard time understanding this outburst, which has shown a behavior that is not predicted by present theories of nova outbursts,' says Bond. 'It may represent a rare combination of stellar properties that we have not seen before.' The star is so unique it may represent a transitory stage in a star's evolution that is rarely seen. The star is a little similar to highly unstable aging stars called eruptive variables, which suddenly and unpredictably increase in brightness.

The circular light-echo feature has now expanded to twice the angular size of Jupiter in the sky. Astronomers expect it to continue expanding as reflected light from farther out in the dust envelope finally arrives at Earth. Bond predicts that the echo will be observable until about 2010.

For broadcasters, computer animations of the discovery and general Hubble Space Telescope background footage is available from: https://www.spacetelescope.org/videos/?search=heic0304

This material is being co-released with NASA/STScI/OPO, Arizona State University, University of Arizona, and the National Science Foundation. 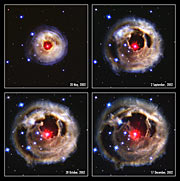 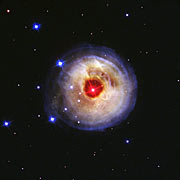 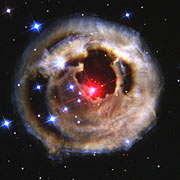 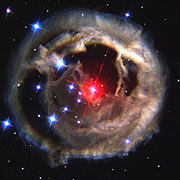 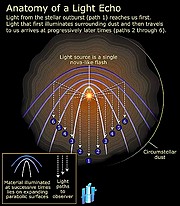 PR Image heic0304h
V838 Mon before and during outburst 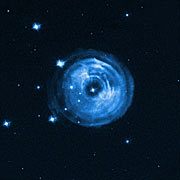