Hubble has sent back an early Christmas card with this new NASA/ESA Hubble Space Telescope image of the nearby spiral galaxy Messier 74. It is an enchanting reminder of the impending season. Resembling glittering baubles on a holiday wreath, bright knots of glowing gas light up the spiral arms; regions of new star birth shining in pink.

Messier 74, also called NGC 628, is a stunning example of a 'grand-design' spiral galaxy that is viewed by Earth observers nearly face-on. Its perfectly symmetrical spiral arms emanate from the central nucleus and are dotted with clusters of young blue stars.

In the new Hubble image we can also see a smattering of bright pink regions decorating the spiral arms. These are huge, relatively short-lived, clouds of hydrogen gas which glow due to the strong radiation from hot, young stars embedded within them; glowing pink regions of ionized hydrogen (hydrogen that has lost its electrons). These regions of star formation show an excess of light at ultraviolet wavelengths and astronomers call them HII regions.

Messier 74 is located roughly 32 million light-years away in the direction of the constellation Pisces, the Fish. It is the dominant member of a small group of about half a dozen galaxies, the Messier 74 galaxy group. In its entirety, it is estimated that Messier 74 is home to about 100 billion stars, making it slightly smaller than our Milky Way.

The spiral galaxy was first discovered by the French astronomer, Pierre Méchain, in 1780. Weeks later it was added to Charles Messier's famous catalogue of deep-sky objects. Of all the objects in Messier's catalogue, number 74 has the lowest surface brightness. It is so difficult for amateur astronomers to spot through a telescope that it has been given the nickname 'The Phantom Galaxy'.

This Hubble image of Messier 74 is a composite of Advanced Camera for Surveys' data taken in 2003 and 2005. The filters used to create the colour image isolate light from blue, visible, and infrared portions of the spectrum, as well as emission from ionized hydrogen.

A small segment of this image used data from the Canada France Hawaii Telescope/Gemini Observatory telescope to fill in a region which Hubble did not image. 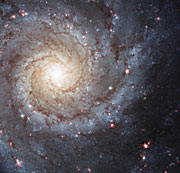 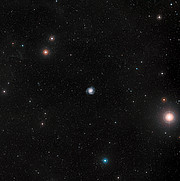