True colour of exoplanet measured for the first time

Astronomers using the NASA/ESA Hubble Space Telescope have, for the first time, determined the true colour of a planet orbiting another star. If seen up close this planet, known as HD 189733b, would be a deep azure blue, reminiscent of Earth’s colour as seen from space.

But that's where the similarities end. This "deep blue dot" is a huge gas giant orbiting very close to its host star. The planet's atmosphere is scorching with a temperature of over 1000 degrees Celsius, and it rains glass, sideways, in howling 7000 kilometre-per-hour winds [1].

At a distance of 63 light-years from us, this turbulent alien world is one of the nearest exoplanets to Earth that can be seen crossing the face of its star. It has been intensively studied by Hubble and other telescopes, and its atmosphere has been found to be dramatically changeable and exotic, with hazes and violent flares (heic0720, heic1209). Now, this planet is the subject of an important first: the first measurement of an exoplanet's visible colour.

"This planet has been studied well in the past, both by ourselves and other teams," says Frédéric Pont of the University of Exeter, UK, leader of the Hubble observing programme and an author of this new paper. "But measuring its colour is a real first — we can actually imagine what this planet would look like if we were able to look at it directly."

In order to measure what this planet would look like to our eyes, the astronomers measured how much light was reflected off the surface of HD 189733b — a property known as albedo [2].

HD 189733b is faint and close to its star. To isolate the planet's light from this starlight, the team used Hubble's Space Telescope Imaging Spectrograph (STIS) to peer at the system before, during, and after the planet passed behind its host star as it orbited. As it slipped behind its star, the light reflected from the planet was temporarily blocked from view, and the amount of light observed from the system dropped. But this technique also shows how the light changes in other ways — for example, its colour [3].

"We saw the brightness of the whole system drop in the blue part of the spectrum when the planet passed behind its star," explains Tom Evans of the University of Oxford, UK, first author of the paper. "From this, we can gather that the planet is blue, because the signal remained constant at the other colours we measured."

The planet's azure blue colour does not come from the reflection of a tropical ocean, but is due to a hazy, turbulent atmosphere thought to be laced with silicate particles, which scatter blue light [4]. Earlier observations using different methods have reported evidence for scattering of blue light on the planet, but these most recent Hubble observations give robust confirming evidence, say the researchers.

HD 189733b presented a favourable case for these kinds of measurements as it belongs to a class of planets known as "hot Jupiters". These massive planets are similar in size to the gas giants in the Solar System, but instead lie very close to their parent star — this size and proximity to their star make them perfect subjects for exoplanet hunting. We know that hot Jupiters are numerous throughout the Universe. As we do not have one close to home in our own Solar System, studies of planets like HD 189733b are important to help us understand these dramatic objects.

"It's difficult to know exactly what causes the colour of a planet's atmosphere, even for planets in the Solar System," says Pont [5]. "But these new observations add another piece to the puzzle over the nature and atmosphere of HD 189733b. We are slowly painting a more complete picture of this exotic planet."

[1] In 2007 NASA's Spitzer Space Telescope measured the infrared light from the planet, producing one of the first ever temperature maps for an exoplanet. The map shows that day- and night-side temperatures differ by about 260 degrees Celsius, causing fierce winds to roar across the planet. The condensation temperature of the silicates (over 1300 degrees Celsius) mean these particles could form very small grains of glass in the atmosphere.

[2] Albedo is a measure of how much incident radiation is reflected. The greater the albedo, the greater the amount of light reflected. This value ranges from 0 to 1, with 1 being perfect reflectivity and 0 being a completely black surface. The Earth has an albedo of around 0.4.

[3] This technique is possible because the planet's orbit is tilted edge-on as viewed from Earth, so that it routinely passes in front of and behind the star. When the planet passes behind its host star, the light received from the system drops by about one part in 10 000.

[4] The deep blue colour of HD 189733b is consistent with the "red sunset of HD 189733b" result from the transit spectrum (heic0720). If sodium absorbs red light and dust scatters red light, the atmosphere will redden light shining through it, but will appear blue in reflected light.

[5] The colours of Jupiter and Venus are both due to unknown particles within the atmospheres of the planets. Earth looks blue from space because the oceans absorb red and green wavelengths more strongly than blue ones, and reflect the blueish hue of our sky. The shorter blue wavelengths of sunlight are selectively scattered by oxygen and nitrogen molecules in our atmosphere via a process called Rayleigh scattering.

The new paper, titled "The deep blue colour of HD 189733b: albedo measurements with HST/STIS at visible wavelengths", will appear in the 1 August issue of the journal Astrophysical Journal Letters. 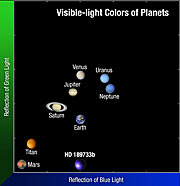