They may only be little, but they pack a star-forming punch: new observations from the NASA/ESA Hubble Space Telescope show that starbursts in dwarf galaxies played a bigger role than expected in the early history of the Universe.

Although galaxies across the Universe are still forming new stars, the majority of the stars were formed between two and six billion years after the Big Bang. Studying this early epoch of the Universe's history is key in order to fully understand how these stars formed, and how galaxies have grown and evolved since.

A new study using data from Hubble's Wide Field Camera 3 (WFC3) has allowed astronomers to take a new step forward in understanding this crucial era by peering at a sample of dwarf galaxies in the early Universe and, in particular, a selection of starburst galaxies within this sample. These starburst galaxies form stars at a furiously fast rate, far above the "normal" star formation rate expected of galaxies. Previous studies of starburst galaxies have focussed on analysing mid-range or high-mass galaxies, leaving out the huge number of dwarf galaxies that existed in this era of prolific star formation.

"We already suspected that dwarf starbursting galaxies would contribute to the early wave of star formation, but this is the first time we’ve been able to measure the effect they actually had," says Hakim Atek of the École Polytechnique Fédérale de Lausanne (EPFL) in Switzerland, lead author of the new paper. "They appear to have had a surprisingly significant role to play during the epoch where the Universe formed most of its stars."

"These galaxies are forming stars so quickly that they could actually double their entire mass of stars in only 150 million years — this sort of gain in stellar mass would take most normal galaxies 1-3 billion years," adds co-author Jean-Paul Kneib, also of EPFL.

This result contributes to a decade-long investigation to understand the links between galaxies' mass and their star-forming activity, and helps to paint a consistent picture of events in the early Universe.

As well as adding new insight into how and where the stars in our Universe formed, this new finding will certainly help to unravel the secrets of galactic evolution. It is unusual to find a galaxy in a state of starburst, implying that they are the result of some strange incident, such as a merger, a tidal interaction with another galaxy, or the shockwave from a supernova. By studying these galaxies more closely and understanding how they formed and behaved in their earliest years, astronomers hope to discover the cause of these violent bursts and learn more about galactic evolution throughout the Universe.

A paper based on this research will be published online in The Astrophysical Journal on 19 June 2014.

[1] The grism splits up the light from the galaxies, revealing the distribution of brightness and colour in the Universe. This allows scientists to deduce facts about their chemical composition and distance from Earth that would not be possible without such a detailed view from Hubble's space-based perspective. 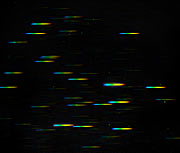