Hubble observes source of gravitational waves for the first time

The NASA/ESA Hubble Space Telescope has observed for the first time the source of a gravitational wave, created by the merger of two neutron stars. This merger created a kilonova — an object predicted by theory decades ago — that ejects heavy elements such as gold and platinum into space. This event also provides the strongest evidence yet that short duration gamma-ray bursts are caused by mergers of neutron stars. This discovery is the first glimpse of multi-messenger astronomy, bringing together both gravitational waves and electromagnetic radiation.

On 17 August 2017 the Laser Interferometer Gravitational-Wave Observatory (LIGO) and the Virgo Interferometer both alerted astronomical observers all over the globe about the detection of a gravitational wave event named GW170817 [1]. About two seconds after the detection of the gravitational wave, ESA’s INTEGRAL telescope and NASA’s Fermi Gamma-ray Space Telescope observed a short gamma-ray burst in the same direction.

In the night following the initial discovery, a fleet of telescopes started their hunt to locate the source of the event. Astronomers found it in the lenticular galaxy NGC 4993, about 130 million light-years away. A point of light was shining where nothing was visible before and this set off one of the largest multi-telescope observing campaigns ever — among these telescopes was the NASA/ESA Hubble Space Telescope [2].

Several different teams of scientists used Hubble over the two weeks following the gravitational wave event alert to observe NGC 4993. Using Hubble’s high-resolution imaging capabilities they managed to get the first observational proof for a kilonova, the visible counterpart of the merging of two extremely dense objects — most likely two neutron stars [3]. Such mergers were first suggested more than 30 years ago but this marks the first firm observation of such an event [4]. The distance to the merger makes the source both the closest gravitational wave event detected so far and also one of the closest gamma-ray burst sources ever seen.

“Once I saw that there had been a trigger from LIGO and Virgo at the same time as a gamma-ray burst I was blown away,” recalls Andrew Levan of the University of Warwick, who led the Hubble team that obtained the first observations. “When I realised that it looked like neutron stars were involved, I was even more amazed. We’ve been waiting a long time for an opportunity like this!”

Hubble captured images of the galaxy in visible and infrared light, witnessing a new bright object within NGC 4993 that was brighter than a nova but fainter than a supernova. The images showed that the object faded noticeably over the six days of the Hubble observations. Using Hubble’s spectroscopic capabilities the teams also found indications of material being ejected by the kilonova as fast as one-fifth of the speed of light.

“It was surprising just how closely the behaviour of the kilonova matched the predictions,” said Nial Tanvir, professor at the University of Leicester and leader of another Hubble observing team. “It looked nothing like known supernovae, which this object could have been, and so confidence was soon very high that this was the real deal.”

Connecting kilonovae and short gamma-ray bursts to neutron star mergers has so far been difficult, but the multitude of detailed observations following the detection of the gravitational wave event GW170817 has now finally verified these connections.

“The spectrum of the kilonova looked exactly like how theoretical physicists had predicted the outcome of the merger of two neutron stars would appear,” says Levan. “It ties this object to the gravitational wave source beyond all reasonable doubt.”

The infrared spectra taken with Hubble also showed several broad bumps and wiggles that signal the formation of some of the heaviest elements in nature. These observations may help solve another long-standing question in astronomy: the origin of heavy chemical elements, like gold and platinum [5]. In the merger of two neutron stars, the conditions appear just right for their production.

The implications of these observations are immense. As Tanvir explains: “This discovery has opened up a new approach to astronomical research, where we combine information from both electromagnetic light and from gravitational waves. We call this multi-messenger astronomy — but until now it has just been a dream!”

Levan concludes: “Now, astronomers won’t just look at the light from an object, as we’ve done for hundreds of years, but also listen to it. Gravitational waves provide us with complementary information from objects which are very hard to study using only electromagnetic waves. So pairing gravitational waves with electromagnetic radiation will help astronomers understand some of the most extreme events in the Universe.”

[1] The ripples in spacetime known as gravitational waves are created by moving masses, but only the most intense waves, created by rapid speed changes of very massive objects, can be detected by the current generation of detectors. Gravitational waves detectable from Earth are generated by collisions of massive objects, such as when two black holes or neutron stars merge.

[3] A neutron star forms when the core of a massive star (above eight times the mass of the Sun) collapses. This process is so violent that it crushes protons and electrons together to form subatomic particles called neutrons. They are supported against further collapse only by neutron degeneracy pressure. This makes neutron stars the smallest and densest stars known.

[4] In 2013 astronomers published results on the evidence for a kilonova, associated with a short gamma-ray burst. The observations in 2013 were far less conclusive, and hence more controversial, than the new results.

[5] These observations pin down the formation of elements heavier than iron through nuclear reactions within high-density stellar objects, known as r-process nucleosynthesis, something which was only theorised before.

The extensive list of team members involved in the discovery and analysis of this discovery can be found here. 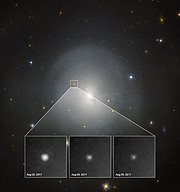 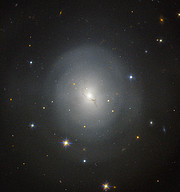 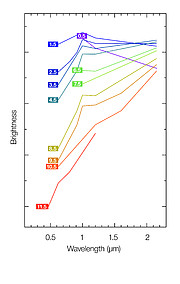