The NASA/ESA Hubble Space Telescope has taken a new look at the spectacular irregular galaxy NGC 4485, which has been warped and wound by its larger galactic neighbour. The gravity of the second galaxy has disrupted the ordered collection of stars, gas and dust, giving rise to an erratic region of newborn, hot, blue stars and chaotic clumps and streams of dust and gas.

The irregular galaxy NGC 4485 has been involved in a dramatic gravitational interplay with its larger galactic neighbour NGC 4490 — out of frame to the bottom right in this image. Found about 30 million light-years away in the constellation of Canes Venatici (the Hunting Dogs), the strange result of these interacting galaxies has resulted in an entry in the Atlas of Peculiar galaxies: Arp 269.

Having already made their closest approach, NGC 4485 and NGC 4490 are now moving away from each other, vastly altered from their original states. Still engaged in a destructive yet creative dance, the gravitational force between them continues to warp each of them out of all recognition, while at the same time creating the conditions for huge regions of intense star formation.

This galactic tug-of-war has created a stream of material about 25 000 light-years long which connects the two galaxies. The stream is made up of bright knots and huge pockets of gassy regions, as well as enormous regions of star formation in which young, massive, blue stars are born. Short-lived, however, these stars quickly run out of fuel and end their lives in dramatic explosions. While such an event seems to be purely destructive, it also enriches the cosmic environment with heavier elements and delivers new material to form a new generation of stars.

Two very different regions are now apparent in NGC 4485; on the left are hints of the galaxy’s previous spiral structure, which was at one time undergoing “normal” galactic evolution. The right of the image reveals a portion of the galaxy ripped towards its larger neighbour, bursting with hot, blue stars and streams of dust and gas.

This image, captured by the Wide Field Camera 3 (WFC3) on the Hubble Space Telescope, adds light through two new filters compared with an image released in 2014. The new data provide further insights into the complex and mysterious field of galaxy evolution. 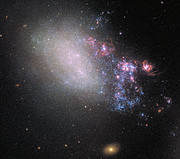 PR Image heic1910a
On the verge