Astronomers have used archival datasets from the NASA/ESA Hubble Space Telescope to reveal the first evidence for water vapour in the atmosphere of Jupiter’s moon Ganymede, the result of the thermal escape of water vapour from the moon’s icy surface.

Jupiter’s moon Ganymede is the largest moon — and the ninth-largest object — in the Solar System. It may hold more water than all of Earth's oceans, but temperatures there are so cold that water on the surface freezes and the ocean lies roughly 160 kilometres below the crust. Nevertheless, where there is water there could be life as we know it. Identifying liquid water on other worlds is crucial in the search for habitable planets beyond Earth. And now, for the first time, evidence has been found for a sublimated water atmosphere on the icy moon Ganymede.

In 1998,  Hubble’s Space Telescope Imaging Spectrograph (STIS) took the first ultraviolet (UV) pictures of Ganymede, which revealed a particular pattern in the observed emissions from the moon’s atmosphere. The moon displays auroral bands that are somewhat similar to the auroral ovals observed on Earth and other planets with magnetic fields. These images were therefore illustrative evidence that Ganymede has a permanent magnetic field. The similarities between the two ultraviolet observations were explained by the presence of molecular oxygen, O2. The differences were explained at the time by the presence of atomic oxygen, O, which produces a signal that affects one UV colour more than the other.

As part of a large observing programme to support NASA’s Juno mission in 2018, Lorenz Roth, of the KTH Royal Institute of Technology in Stockholm, Sweden, led a team that set out to capture UV spectra of Ganymede with Hubble’s Cosmic Origins Spectrograph (COS) instrument to measure the amount of atomic oxygen. They carried out a  combined analysis of new spectra taken in 2018 with the COS and archival images from the STIS instrument from 1998 and 2010. To their surprise, and in contrast to the original interpretations of the data from 1998, they discovered there was hardly any atomic oxygen in Ganymede's atmosphere. This means there must be another explanation for the apparent differences between the UV aurora images.

The explanation was then uncovered by Roth and his team in the relative distribution of the aurorae in the two images. Ganymede's surface temperature varies strongly throughout the day, and around noon near the equator it may become sufficiently warm that the icy surface releases some small amounts of water molecules. In fact, the perceived differences between the UV images are directly correlated with where water would be expected in the moon’s atmosphere.

“Initially only the O2 had been observed,” explained Roth. “This is produced when charged particles erode the ice surface. The water vapour that we have now measured originates from ice sublimation caused by the thermal escape of H2O vapour from warm icy regions.”

This finding adds anticipation to ESA’s upcoming JUpiter ICy moons Explorer (JUICE) mission — the first large-class mission in ESA's Cosmic Vision 2015–2025 programme. Planned for launch in 2022 and arrival at Jupiter in 2029, it will spend at least three years making detailed observations of Jupiter and three of its largest moons, with particular emphasis on Ganymede as a planetary body and potential habitable world. Ganymede was identified for detailed investigation because it provides a natural laboratory for the analysis of the nature, evolution and potential habitability of icy worlds in general and the role it plays within the system of Galilean satellites, and its unique magnetic and plasma interactions with Jupiter and its environment (known as the Jovian system).

“Our results can provide the JUICE instrument teams with valuable information that may be used to refine their observation plans to optimise the use of the spacecraft,” added Roth.

Understanding the Jovian system and unravelling its history, from its origin to the possible emergence of habitable environments, will provide us with a better understanding of how gas giant planets and their satellites form and evolve. In addition, new insights will hopefully be found into the potential for the emergence of life in Jupiter-like exoplanetary systems. 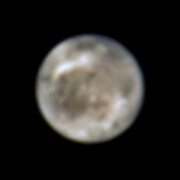 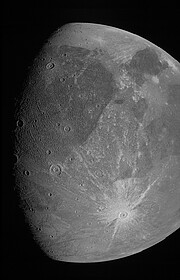